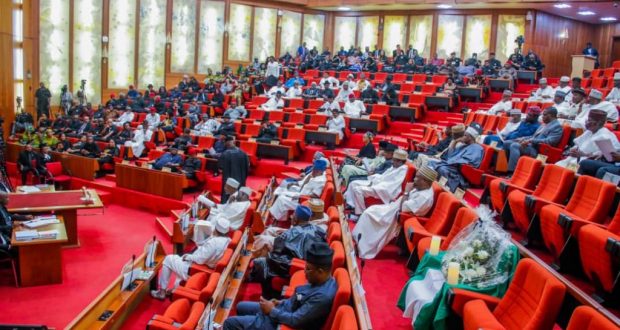 There was a mild drama on the floor of the Senate yesterday when members of the ad – hoc committee on oil theft, disowned report presented by their Chairman, Senator Akpan Bassey for consideration and adoption.

Seven months after the assignment however, the committee presented its report for Senate’s consideration and adoption at Senate in plenary.

The Senate panel Chairman ran into trouble when some of its members disowned the report.

The Deputy Senate President, Ovie Omo – Agege who presided had noted that only six out of the 13 members signed the report presented to him.

Omo – Agege ‘s observation triggered open confessions by some members of the committee who out rightly disowned the report .

Senator Sani Musa (APC Niger East ), openly told the Senate that the six signatures attached to the report were taken from attendance list taken at the first sitting of the Committee in April .

He said, “Mr. President and Distinguished Colleagues, only three and not six members of the committee signed the report.

“As a member, I attended the first meeting along with five other Senators whose signatures were attached to the report.

“After the first meeting, I was not invited for any other meeting and I did not attend any, making this report before us today, a very strange one to me,” he said.

Another member of the Committee, Senator Kashim Shettima (APC Borno Central), said as a member of the committee, he was never invited for any meeting and cannot say anything on the report being presented to the Senate for consideration and approval.

The Deputy Senate President called Senator George Sekibo as a member of the committee to give the way out of the problem.

Sekibo suggested that the report should be withdrawn for consensus among committee members between now and Monday next week for re – presentation next Tuesday at plenary .

Omo – Agege consequently put the suggestion to voice votes with majority of the Senators concurring to it .

Meanwhile, the Senate yesterday set up an ad-hoc committee to investigate an alleged un-even disbursement of N500 billion loan by the Development Bank of Nigeria (DBN).

The red chamber also urged the bank to ensure equitable disbursement of the loan in the six geo-political zones of the country.

It called on the bank to expand its loan facilities beyond the five sectors already captured by it.

He said the top five sectors considered for the loan were oil and gas (42 per cent, manufacturing (16 per cent), agriculture, forestry and fishery (7.2 per cent), trade and commerce (6.3 per cent) and transportation and storage (3.5 per cent).

The resolutions of the Senate followed its consideration of a motion titled: “Un-even disbursement of half a trillion Naira loan to six geo-political regions by Nigeria’s Development Bank.”

Ndume in his lead debate, urged the Senate to note that there exists a huge disparity and un-even disbursement of N500 billion loan to the six geo-political regions of the country in 2021 by the Development Bank of Nigeria.

He claimed that Lagos State got 47 per cent of the loan which amounted to over N274.7 billion while all states in the North accessed only 11 per cent in the sum of over N53 billion.

He urged his colleagues to be worried that the South West accessed a lion share of 57 per cent of the loan amounting to N274.7 billion.

He reminded the chamber that the DBN exists to alleviate financing constraints faced by Micro, Small and Medium Scale Enterprises (MSMEs) in the country through, “providing finance, partial credit guarantees, and technical assistance to eligible financial intermediaries on a market conforming and fully financially sustainable.”

He insisted that it was regrettable that lack of awareness of the existence of the loan or the bank and religious belief that precludes Muslims from taking interests loans and lack of formalisation of business had aided the alleged un-even loan disbursement.