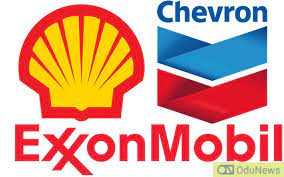 Chevron, Shell, Others to Remit N341 Billion JV Revenue to NNPCL in September

The proceeds, which are from the sale of domestic crude oil in June this year, are only due to being offset this month in line with the 90-day payment terms between the parties involved.However, an analysis of the data from the NNPCL showed that the figure fell short of the amount collected as crude oil payables from the oil companies in August.

But this month, the number of firms that would pay the national oil company has dropped to four.From the newly released data, Mobil had the highest domestic crude production with 2.849 million barrels, followed by Chevron with 2.817 million barrels.In addition, SPDC owed 948,598 barrels worth of cash while First E&P owed the NNPCL domestic crude worth 650,011 barrels.

In addition, SPDC is expected to remit N45.23 billion, equivalent to $114.58 million even as First E&P will pay N29.71 billion, which is equivalent to about $72.27 million, according to the information contained in the presentation to the Federation Account Allocation Committee (FAAC).In all, the four companies have an outstanding payment for 7.265 million barrels cumulatively, worth $863.961 million, an equivalent of N341.091 billion.Although the NNPCL should make remittances from crude oil sales to the Federation Account, which are shared by the three tiers of government monthly, it has not been able to do this in the last seven months.

The NNPCL blames massive oil theft, deterioration in upstream infrastructure as well as outright assets sabotage for its inability to meet the Organisation of Petroleum Exporting Countries (OPEC) quota for over a year.

The National Petroleum Investment Services (NAPIMS) manages the equity holdings of the federal government JV operations with many contractors and also supervises the mechanism of funding the operations through the cash-call process, usually on a 60-40 per cent basis or 55-45 per cent basis.The little received from oil sales is spent on petrol subsidy expected to exceed N4 trillion this year alone.The total spending on the controversial and opaque petrol subsidy regime now exceeds revenue, with the NNPCL outstanding debt on what it terms under-recovery hitting N1.044 trillion in July.

NNPCL deducted N448.7 billion as subsidy, a record high since the re-emergence of under-recovery payment early last year.There was no receipt from export crude oil at all during the month, while in the whole of July just about N400 billion was the gross domestic crude oil and receipts, implying that the amount spent on petrol subsidy for the month exceeded the total oil sold for the month by roughly N48 billion.In addition, for the whole of the month, no project outlined by the national oil firm was paid for aside from the one for subsidy.

Some of the scheduled monthly payments by the NNPCL include those for national domestic gas development, frontier exploration services and renewable energy development. In a related development, global oil giant, Shell will replace its Chief Executive Officer, Ben van Beurden, next year, Reuters reported at the weekend, quoting two sources at the company.

The CEO is preparing to step down from Shell next year and the oil and gas supermajor has started a selection process for a successor, the report stated.Dutchman, van Beurden, 64, became CEO at Shell in 2014, and has steered the supermajor through two major oil price routs and industry downturns, as well as the recent move of the company’s headquarters and tax residence from the Netherlands to the UK.

In recent months, Shell has dropped ‘Royal Dutch’ from its name as it moved its tax residence to the UK from the Netherlands and made its share structure simpler for investors to value and understand.The supermajor has also accelerated investments in renewable energy and other clean energy solutions, including hydrogen.Before becoming CEO in 2014, van Beurden was head of downstream at Shell, which he joined in 1983.

Sawan is the front-runner to succeed van Beurden, although Shell’s board succession committee, which should pick the next CEO, hasn’t made any decision yet, one of the sources told Reuters.Whoever the next CEO is, they will have to manage the company through the energy transition and will likely feel even more pressure than van Beurden to speed up emissions reductions and targets at Shell, while keeping shareholders happy with dividend growth.