Home » FINANCING » Lekki Port to Generate $562b Revenue in 45years 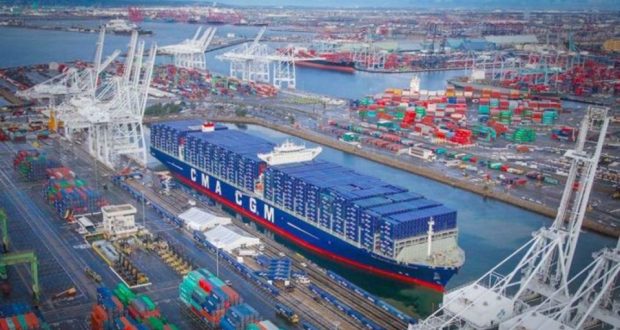 Lekki Port to Generate $562b Revenue in 45years

The Lekki Deep Sea Port is expected to generate an estimated $562b revenue to federal government coffers in 45 years, The Nation has learnt.

Giving this hint at the weekend were top management staff of the company during the Private Public Partnership Consultative Forum held at its corporate headquarters at the Lagos Free Trade Zone, Lekki-Expressway.

Speaking separately at the forum, Laurence Smith, Chief Operating Officer and Daniel Odibe, Head, Regulatory and Procurement, who addressed some heads of key ministry and departmental agencies, expressed the company’s readiness to commence operation in the first quarter of 2023.

According to Smith, the key timelines for the port operation is first quarter of 2023 with construction fully completed by September this year.

“The port is being constructed at the cost of $1.5billion and from studies, we expect that it will have an aggregate impact on the economy to the tune of $361billion over 45 years and it will also generate about 170, 000 jobs with another $201b as revenue to the federal and state governments in terms of taxes, royalties. With the location in a free trade zone, which of course, houses a lot of manufacturing companies, trading and commercial services we expect that it will have a huge impact on the economy,” Smith said.

Echoing similar sentiments, Odibe said, “The port has a land area of 90 hectares on built-own and transfer operations basis with the NPA for a 45 years period. When it is completely built it is going to have three containers berths one dry port berth. The advantages of having a bigger deep sea port is that you can get bigger vessels in. In shipping, it is of a big cost advantage if you can have bigger vessels because of the operating cost for shipping lines. It reduces the cost of transportation.

“Currently, in West Africa, we have bigger ports in Tema, Ghana, Lome and Abidjan. So in a way, the country has been losing cargoes to these countries because there is no big deep sea port. So with Lekki Port been here, it is going to attract cargo naturally here.”

While commenting on the ownership structure of the port, Odibe said, “China Harbour Engineering Company is the majority shareholder with 52 per cent of the total shares, Tolaram, which also owns the LFTZ, has a 22.5 per cent stake; the Federal Government through the NPA maintains 5 per cent while Lagos State Government has 20 per cent. So altogether, they form a special purpose vehicle to operate the port.” Speaking on the development, the acting Director-General of the Infrastructure Concession Regulatory Commission (ICRC) Mr Michael Ohiani, who led the Pubic Private Partnership Units Consultative Forum (3PUCF) on a site tour of the Lekki Deep Sea Port said the MDAs wanted to come and see things for themselves. “They wanted to see the state of work and get firsthand information on what is on ground.  The essence is to see that the September and December dates are met. The essence is to see that it will be completed this year. The management of Lekki Port has revealed that it is 94 per cent completion and we are very impressed with what we have seen.”