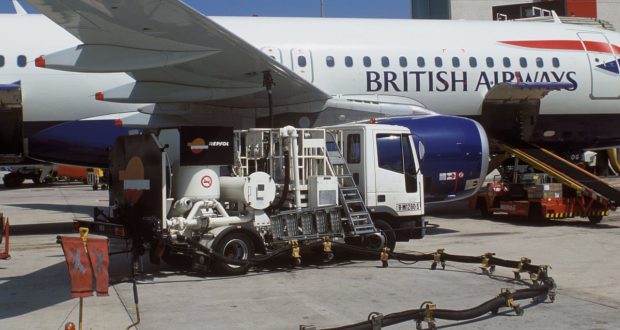 Some Major oil marketers have kicked against the plan by Airline Operators of Nigeria (AON) to arm twist the federal government to regulate the price of Aviation fuel.

The airline operators in a move to push for the reduction of the cost of aviation fuel (jet A1) had threatenedr to suspend domestic flight from today Monday the 9th of May, in order to attract the attention of the government and simpathy from the public.

Last week members AON had met with the National Assembly members pleading that they should intervene in the rising cost of aviation fuel. According to AON the Federal Government assured them that it is working on reducing the cost of Aviation fuel, to ease the burden on airline operators in Nigeria.

In a swift reaction some major oil marketers have kicked against it. The Managing Director of 11 Plc, Tunji Oyebanji said that Airline Operators are trying to pressurise government to control prices by fiat. “Rather than do that, let NNPC import and sell to the airlines at a loss. In the alternative let people pay the appropriate price for airline tickets. Aviation is not a social welfare business” Oyebanji said.

He maintained that they. Airline operators have also been given the opportunity to import themselves, why don’t they do that.

The Chief Executive Officer of Hyde Petroleum Limited, Dimeji Edward collaborated what Oyebanji said adding that the aviation operators either do not understand their business or are being deliberately mischievous.

The CEO of Hyde Petroleum gave reasons for his opinion saying that the Airfares are deregulated and their businesses are based on market conditions. “Aviation Fuel as well as all other inputs are also deregulated. The challenge they have is two fold – the current high price of aviation fuel as a result of the Ukraine war and the devaluation of naira whcih make it a double hit” Edward said

He pointed out that as long as the war persists prices of aviation fuel will be high. “We are entering travel season due to long holidays aviation business will become more expensive” he said.

The marketers advised AON Chairman to go into importation of Aviation fuel since he is also into oil and gas business as the chairman of Azman Oil and Gas.

Meanwhile three airline operators, Ibom Air, Arik and Dana are said to have pulled out of the planned strike by AON to suspend flight operations today.