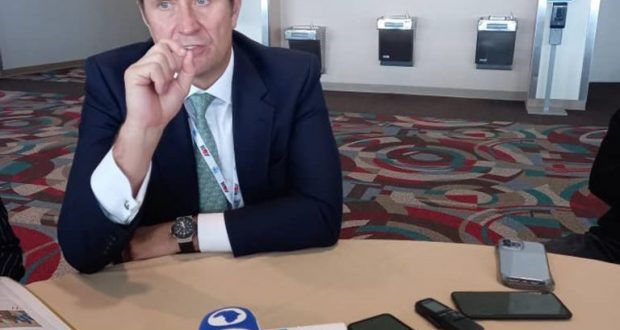 Seplat Energy Plc’s Chief Executive Officer, Mr. Roger Brown, has commended the progress currently made on its gas project – the Assa North-Ohaji South project (ANOH) in Imo State, describing the project as a game changer for the company’s gas business.

Mr. Brown who spoke to Nigerian journalists on the sideline of the just concluded 2022 Offshore Technology Conference in Houston, Texas, noted that the 300 million standard cubic feet per day (mmscfd) gas project will begin operation next year as against the earlier planned end of first halve of 2022.

The Seplat chief explained the cause of delay of pushing the first gas from the plant to customers, saying it was as a result of supply chain issues.

He said: “The ANOH is a game changer in terms of gas business. By mid next year the project will be up and running. The first gas is being delayed because one of the pipelines connecting into it is being delayed by supply chain issues in getting the steel pipes from China. However, it is a temporary issue.

“For us, the 300mmscf/d gas plant is material and will do dry gas processing that will be supplied to industrial customers. ANOH field which is the one of the biggest onshore fields in Nigeria is a condensate rich field. The liquid is in two reservoirs but one of them in particular is rich in it.

“When we start producing and add our working interest element into it, we will add almost 10,000 per day production of condensate.

“That is a material game changer for us as a business, we will reinforces our gas credentials in the country. We will become one of the biggest gas processing company next to government in Nigeria.

“It is a very important part of our business model to deliver that.

“We started investing in gas in 2012, when we first bought the first assets from Shell. Gas has no value then, it was a headache.

“What we found over the years is that it has become commercial in the country, especially domestic gas supply. It is a good business opportunity and the ANOH gas plant will augment and grow that quite dramatically. We are big believer in domestic gas, we also believe in Nigeria Liquefied Natural Gas (NLNG) for export. But for all being exported will be bad for Nigeria.

“We need to develop more domestic gas because the price of diesel in the country is insane. The average Nigerian is spending a lot on power, electricity, diesel and PMS (petrol) generators.

“It is hugely holding back the country. It is very polluting, noisy and very expensive. It is five times more expensive than gas and it is not creating the jobs within the country because companies cannot afford to run their operations on fuel.

“ANOH will create enormous value for the country. We work with government, we will love its completion to be faster.”

ANOH plant project is one of the Federal Government’s 2018 Seven Critical Gas Development Projects and one of Nigeria’s most strategic gas projects. It will process gas captured from Seplat’s onshore oil block in oil mining lease (OML 53) in Imo State.

The project is being built by ANOH Gas Processing Company Limited (AGPC), an incorporated joint venture (IJV) owned equally (50 per cent apiece) between Seplat and the Nigerian Gas Company (NGC), which is an arm of the Nigerian National Petroleum Company Limited (NNPC). Seplat and NGC have previously provided a combined US$420m in equity funding and the project is now fully funded.

The plant’s construction cost is estimated at $650 million. The two stakeholders – Seplat and NGC, had previously provided a combined $420 million in equity funding.

The AGPC construction cost came down to $650 million, inclusive of financing costs and taxes, as a result of cost optimisation programme, significantly lower than the original projected cost of $700 million.

Seplat is a leading provider of natural gas to Nigeria’s power sector, supplying around 30 per cent of gas used for electricity generation.