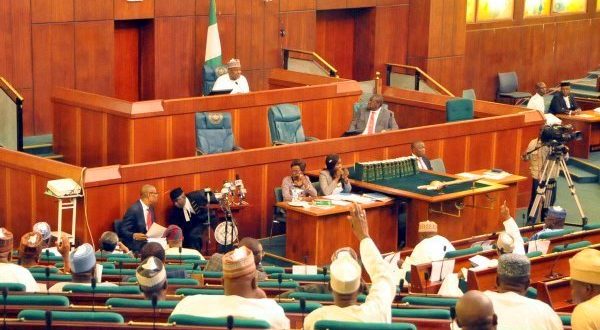 The House of Representatives on Thursday dismissed the allegations of importation of Off Spec fuel against four companies by the Nigerian National Petroleum Company Limited.

The companies are Oando Oil, MRS Oil and Gas, Duke Oil and Emadeb consortium (Hyde, AY Maikii, Brittania-U), all of which were accused of bringing methanol laden fuel into the country

Exonerating the companies, the House Committee Petroleum Downstream said it arrived at its conclusion after painstakingly looking at the issue and discovered that the companies are not guilty of the offence they are accused of, and therefore not recommended for suspension.

While adopting the report of the committee, the House asked the NNPC to maintain local supply and distribution of 90 million litres daily across the country until normalcy is restored.

It also asked the Ministers of Petroleum Resources to expedite the action for completion of the rehabilitation work and ensure the upgrading of the major refineries at Warri, Port Harcourt and Kaduna to meet AFRI5 specifications to boost local refining and reduce over-dependence on imported Nigeria to avert a reoccurrence.

The House called for the adoption of the 2017 PMS standard (NIS 116:2017) as approved by the Standards Organisation of Nigeria (SON), which includes testing for Methanol for future importation of the product into the country to mitigate reoccurrence.

Meanwhile, the House has passed the 2022 supplementary budget which makes provision for petrol subsidy.

The Four oil companies were accused by the Group Managing Director of the Nigerian National Petroleum Company (NNPC) Limited, Mele Kyari. But they all denied being complicit in the act.

In their separate reactions, the four companies – MRS, Emadeb, Brittania-U and Oando – vehemently denied importing the high methanol petrol that is unacceptable in Nigeria.

However, before Kyari’s revelation, MRS had in a newspaper advertorial, in response to reports linking it with the saga, stated that it remained a responsible corporate citizen and would not be involved in the purchase, importation, distribution or marketing of substandard petroleum products in the country

MRS said: “Due to the current subsidy regime, NNPC is the sole supplier of all PMS in Nigeria. Consequently, the NNPC through their trading arm, Duke Oil, supplied a cargo of PMS purchased from international trader Litasco and delivered it with Motor Tanker (MT) Nord Gainer. This vessel discharged in Apapa between the 24th and 30th of January, 2022.”

As one of the beneficiaries, MRS said it received the product in its depot and distributed it to only eight of its stations in Lagos.

In its reaction to the allegation, Brittania-U, in a public notice in newspapers yesterday, denied involvement in the importation of the off-spec petrol in circulation.

The management of Brittania-U exonerated the company from the controversy over off-spec Premium Motor Spirit (PMS) in circulation in the country, saying its products that arrived and discharged from 4th to 19th January, 2022, through five daughter vessels, were duly certified as meeting NNPC’s product specifications