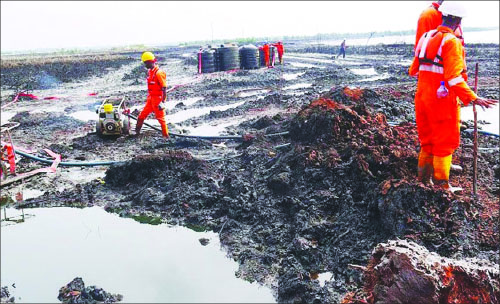 The Hydrocarbon Pollution Remediation Project (HYPREP), on Tuesday assured of speedy completion of ongoing clean-up of the Ogoni land in honour of the memories of the Ogoni 13 freedom fighters.

Project Coordinator, HYPREP, Dr Ferdinand Giadom, who gave the assurance to journalists in Port Harcourt, Rivers State, said the 13 Ogoni martyrs would be the first consideration in all decisions HYPREP would take under his administration.

The Ogoni 13, including playwright, Ken Saro-Wiwa, were tried and hanged in 1995, by a military tribunal for allegedly masterminding the gruesome murder of Ogoni chiefs at a pro-government meeting.

Giadom, who was newly-appointed to lead the agency, said: “We will not leave behind the memories of the Ogoni 13, who laid down their lives and their families who sacrificed everything so that we could live today.

“HYPREP will at all times make them the first consideration in all decisions that we are going to make. So, they will be part of everything.”

He also assured that funds appropriated for the clean-up exercise would not be diverted, in honour of the martyrs.

“So, we will not abuse their memories by squandering funds as well as not showing commitment to the clean-up process.

“Consequently, let us remember when we demand for things that people died for us to live, and so, make efforts to ensure the clean-up project succeeds.

…we will give aid to farmers to boost their productivity as well as engage with ‘agropreneurs,’ who will take agriculture as a business and grow the sector.

Giadom also promised that attention would be given to priority projects and those he called the downtrodden in Ogoni land to improve their welfare.

Priority attention will also be given to agriculture, to drive job creation for indigent Ogoni people.

“To this end, we will give aid to farmers to boost their productivity as well as engage with ‘agropreneurs,’ who will take agriculture as a business and grow the sector.

“We want to reposition Ogoniland to become what it used to be – the food basket of the Niger Delta,” he said.

He said his economic development programme to be unveiled soon, would be driven by the livelihood programmes already introduced.

He appealed for patience and support of the traditional rulers, political leaders, youths and various interest groups in the area to enable the agency deliver on its mandate.