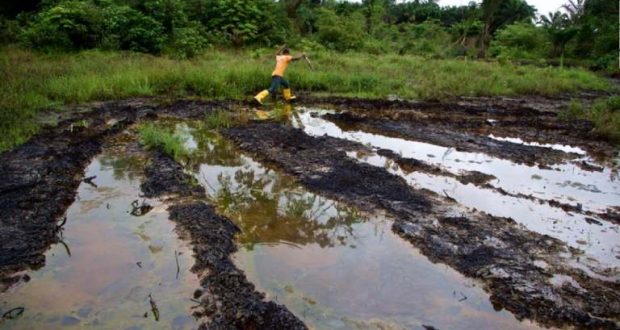 Experts involved in the killing of the Santa Barbara Wellhead in Nembe, Bayelsa State, have argued that only deliberate interference with the equipment could have enabled a disruption to its normal functions.

The spillage, which has now been stopped, the engineers stated, could only have resulted in that type of outcome because the device was tampered with.

Specifically, they concluded that it was impossible for a wing valve installed on a wellhead to become detached so abruptly, noting that the type of action could only have been achieved if unauthorised persons had altered the facility.

The wing valve is a piece of flow-control equipment used in oil and gas operations and is part of a Christmas tree used to shut inflow from an oil well.

Representative of the Nigerian Upstream Petroleum Regulatory Commission (NURPC) and member of the Joint Investigation Visit, Adetoyinbo Adeyemi, briefing the media on the team’s findings on the Santa Barbara Wellhead in Nembe … recently.

The findings by the experts have further amplified reports made by the Nigerian Upstream Petroleum Regulatory Commission (NUPRC) and the National Oil Spills Detection and Response Agency (NOSDRA), two critical federal agencies, which earlier linked the leak to sabotage.

During a Joint Investigation Visit (JIV) to the Santa Barbara River, Nembe, both organisations on the on-site assessment of the wellhead, had agreed that unknown persons must have tampered with them, leading to the leak that enabled the blowout to occur with such intensity.

The representative of the NURPC, Mr. Adetoyinbo Adeyemi, stated that the physical examination of the failed wellhead, from an engineering point of view, indicated that the pressure from the equipment was not of a sufficient level to cause a blowout leading to the type of consequence if it was not tampered with.

He argued that the wind valve is designed to withstand extremely high pressure and could not have failed, if it had not tampered with, explaining that the fact that the facility was not even producing, the internal well pressure would have been quite low at the time.

“We are here to establish the cause of the incident that happened at the Santa Barbara well 1. From the findings, you can see that there’s no spill anymore. Where the spill came out from is from the wing valve.

“The wing valve has been replaced now. That means that the wing valve, the way it was, is not designed to fail like that because there are bolts surrounding it, well designed to keep the pressure in place.

“ So, if it had not been taken off, there is no way it could have moved from there. When it was reported initially, there was no valve in that place, and none was found. So, to us, it is an act of sabotage,” he maintained.

According to him, before the well’s assembly was designed, it was done to take care of any pressure from the well, insisting that the fact that the well had not been producing for a long time meant there was no pressure to take off the valve.

“They are called the barriers to ensure that such an environment where it has been installed is not affected. So, if you are trying to compare an apple with an orange, it’s going to be a wrong thing,” he stated.

In addition, NOSDRA’s Ismail Baba-Ahmed traced the leak to the same cause, stressing that from his expertise in fluid mechanics; his own physical examination at the site and his interactions with the wellhead experts who plugged the leak, only vandalism could have led to the blowout.

“I specifically asked the engineer before fixing the valve, what were the circumstances of the thread? This is because if those valves were pulled out under pressure, the threads would be worn out and he answered emphatically that the threads were intact.

“The most likely cause that could remove those valves was external influences. If those valves were removed under internal pressure, the thread would wear out because it will pull out,” he explained.

Another NOSDRA representative, Olubunmi Akindele, also corroborated his colleague’s position, although the Bayelsa state government representatives had disputed the outcome of the investigation and had refused to append their signatures to the official JIV report.

He stated: “If this thing wasn’t worn out and it was a sudden thing, then it’s a surge. In addition, if it had not been building for some time, it cannot come off suddenly. That corroborates what my colleague has said,” Akindele said.

Chief Executive Officer of Kenyon International, the company that undertook the sealing of the leak, Victor Ekpenyong, in his comments, insisted that wing valves are designed to be sturdier than the pressure they are meant to withstand.

“So, it’s not correct to say that the pressure from the reservoir pulled out the Christmas tree. The well was not drilled by Aiteo, it was drilled by Shell. Shell is an international company with a high reputation worldwide. Aiteo inherited the well from Shell.

“Everything that has to do with this well was well designed and taken care of. There’s no chance that the pressure can pull out the valve. In industry best practices, a well needs first line and second line maintenance. Aiteo has a procedure which I have seen,” he maintained.

Ekpenyong further explained that the stud the community alleged was tampered with within the process of fixing the leak was the anti-theft device and not the knot of the valve that was vandalised.

Global Group Director/Coordinator, Asset Protection/Security Services and Community Matters, Aiteo, Andrew Oru, also reiterated that beyond emotions and sentiments, the facility had spilt about 16,000 barrels as against a loss of two million barrels that have been vaunted by certain individuals.

Also, Aiteo engineer, Glory Odita, disclosed that the well had been in existence for about 20 years, insisting that wing valves do not detach on their own.

According to him, the reservoir pressure determines the pressure valve, which he put at about 6,500 PSI, adding that that kind of pressure was not possible with a well that was not in production and had been shut-in as well.

The leak, which was reported on November 5, was plugged on December 8.

Share about us
2021-12-30
admin
Previous: Why We Take Over Donated Electricity Equipment — ANED
Next: NNPC to Receive N249 Billion from Oil Sales by Six IOCs