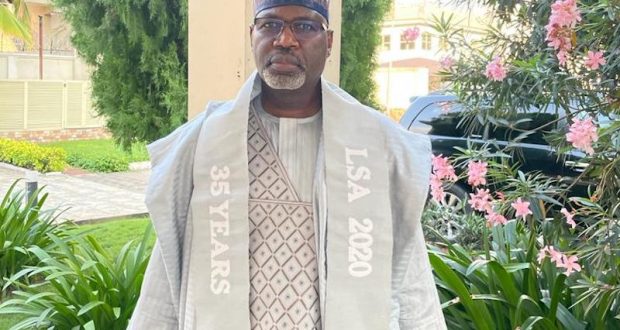 Engr. Ahmadu Musa Kida was recently honoured by TotalEnergies Nigerian office to commemorate his 35 years of unbroken meritorious service. It was a chance for the company to thank him for overseeing the growth of Total for over 3 decades where he served at various leadership levels.

The company described Kida as a super mentor of mentors to a multitude of TOTAL staff. Little wondered he was retained as a Non Executive Director at Total.

Kida, an engineer and former basketball player, hails from Borno State in Nigeria .

He received his degree in civil engineering from Ahmadu Bello University, Zaria, in 1984. He obtained a postgraduate diploma in petroleum engineering from the Institut Francaise du Petrole (IFP) in Paris.

He started his career as a professional at ELF Petroleum Nigeria as a trainee engineer and materials coordinator. Kida joined Total Exploration & Production Nigeria in 1985 and was appointed the Deputy Managing Director of TEPNG Deepwater District as well as on the Board member of Total Upstream Companies in Nigeria on August 01, 2015.

Kida became a member of the Total E&P Nigeria board in 2014 as executive director for the Port Harcourt district.

In August 2015, Kida was appointed as the deputy managing director of the Deepwater district in Lagos. He retired voluntarily from TotalEnergies in 2020 after 35 years in service.