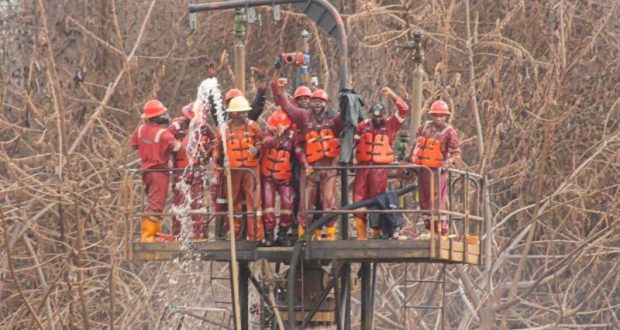 Aiteo Eastern Exploration and Production Company says it is intensifying clean up from the Nembe oil spill after the leak was plugged.

Okoronkwo said, “Indigenous participation in the Upstream space is nascent.

“The efforts evident in the management of this incident, especially the remarkable Aiteo E&P Health Safety and Environment Policy, which mitigated adverse impact, was patriotic.

“It foretells the progress that has been made in building, growing, and elevating both expertise and technical capabilities by indigenous oil companies such as ours.

“The professionalism with which the technical and support personnel execute this significant operation cannot be overemphasised, especially, considering the challenging operating terrain.

“The clean-up efforts that were concurrently executed throughout this period to limit the spread of hydrocarbon will now be comprehensively escalated.’’

He said that concerted efforts would be channeled towards increasing remediation measures.

Okoronkwo added, “In prosecuting the remediation activities and in aligning with Aiteo E&P’s strategic priorities, to ensure uninterrupted continuation of the living conditions and wellbeing of the communities remain the paramount consideration.’’

Meanwhile, Prof. Richard Steiner, an Oil Spill Specialist, reacting to the plug of the leak, suggested that the well head be preserved for examination by independent experts.

He said that this became necessary given the controversy that trailed the cause of the leak.

Steiner called for the adoption of international best practices and transparency in the investigation of the cause of the incident.

“There is a critical need to have the failed wellhead at Nembe OML29 preserved as evidence, and examined by independent engineers to determine cause of the failure.

“If it is not preserved under rigorous chain-of-custody procedures, we will never know if it had been adulterated before the blowout or after or whether this was caused by simple equipment failure,’’ he said.

While the oil firm said it suspected sabotage, the Bayelsa State Government and impacted communities claimed the spill was caused by equipment failure.

However, the National Oil Spill Detection and Response Agency (NOSDRA) had urged parties to desist from making assumptions that would prejudice investigation.

Mr Idris Musa, NOSDRA’s Director-General, had dismissed the positions held by parties on the spill as guess work.

He said that only an evidence-based investigation led by the agency would determine the cause and volume of spill.