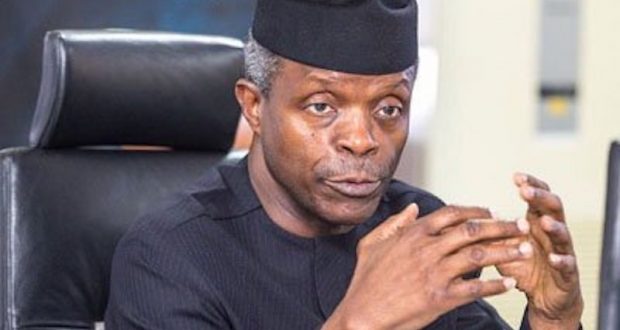 Vice President Yemi Osinbajo has said that Nigeria would require investments of up to $410 billion to achieve net-zero by 2060.

Osinbajo said LPG and natural gas are sustainable energy fuels that could address both climate change and energy poverty simultaneously.

He said the Federal Government had developed an energy transition plan “which shows that achieving net-zero by 2060 will require investments of about $410 billion, above business as usual.”

The world should not have to choose between energy poverty and climate change as this can be addressed with both natural gas and Liquefied Petroleum Gas as transition fuels alongside other renewable sources.

Osinbajo disclosed that Nigeria’s energy transition plan is tied to adopting and domesticating all forms of cleaner energy, adding that the use of LPG as a transition fuel is the viable option for the country to address climate change and energy poverty.

He argued that for a gas-rich country like Nigeria, the most viable option in terms of balancing energy security with environmental sustainability would be the use of LPG as a transition fuel.

To this end, he said Nigeria has developed an integrated energy plan with a clean cooking model, which showcases the clean cooking opportunities across technologies such as electric cooking and LPG.

“This model shows that there is an opportunity to transition at least five million households to LPG solutions, which will cut emissions by 30% compared to business as usual, reduce other pollutants by 90% or more and avoid 6.9 billion kilogrammes of forest loss from biomass collection.

“These cleaner energy systems include solar for electricity, waste to energy, wind energy, hydropower, and natural gas, which aim to adopt and domesticate all forms of cleaner energy sources from household use to commercial use,” he said.

He noted that for countries like Nigeria, which has ample natural resources but is still energy-poor, energy transition fuels must possess certain qualities including affordability, reliability, equity, and inclusiveness.

He insisted that the implementation of various initiatives and legal frameworks on LPG elevates it as the fuel of choice compared to other competing fuels.

“And we have established a 20 million cylinder injection scheme; 5 -10 million of these are to be introduced in pilot states next year. We have also established an LPG energy fund in the order of $50 million, in its first phase, in partnership with Afreximbank,” he told the audience.

For countries like Nigeria, which has ample natural resources but is still energy-poor, energy transition fuels must possess certain qualities including affordability, reliability, equity, and inclusiveness.

Osinbajo explained further that the government has “consummated collaboration with the EU through a study on CO2 savings based on the National LPG Expansion Implementation Programme for clean cooking.’

“Also in the last three years, several LPG coastal terminals have been opened in Lagos, Warri, Port Harcourt, and Calabar, with the latest one opening in Warri later this month..

“We also have a waiver of import duty on machinery, equipment, and spare parts for the establishment of LPG plants for 10 years (subject to renewal) and a 5-year tax holiday for investors in the LPG value chain.

“Our target is 5,000,000MT, and this requires at least $6 billion for the required LPG infrastructure roll-out to meet our target.

“From inland and coastal terminals to cylinder filling plants, bobtails, semi-trailers, valves and regulators, Nigeria presents a unique LPG investment destination for setting up manufacturing facilities and support services for the expanded LPG value chain in the National LPG Expansion.”

As a result, he urged that “The world should not have to choose between energy poverty and climate change as this can be addressed with both natural gas and Liquefied Petroleum Gas as transition fuels alongside other renewable sources.”

Share about us
2021-12-08
admin
Previous: Electricity Workers Call Off Strike After Signing MOU With Government Officers
Next: OPEC Extends Compensation for Nigeria, Others to June 2022