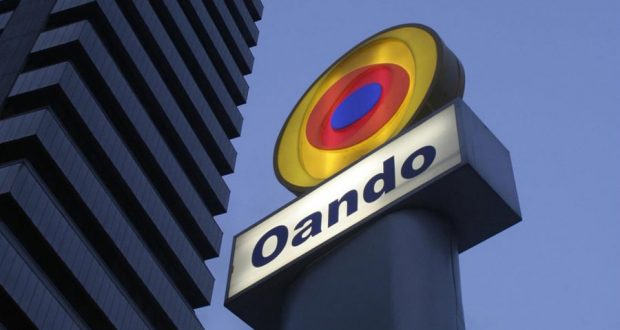 Trading on the Nigerian bourse opened on Monday on a positive note with turnover appreciating by 1,103.94 per cent due to off-market trade in Oando Plc.

Specifically, a total of 2.40 billion units valued at N16.47 billion were exchanged by investors in 4,811 deals.

Transactions in the shares of Oando topped the activity chart with 1.97 billion shares valued at N11.83 billion in off-market trade at N6 per share in eight deals.

The transaction was negotiated as a cross deal by APT Securities and Funds Ltd. as both buyer and seller.

Speaking on the transaction, a broker at APT Securities and Funds Limited, who pleaded anonymity, said the transaction was part of the agreement between Oando and Ocean and Oil Development Partners Ltd. to settle their dispute.

The stockbroker said Alhaji Dahir Mangal, representative of company, was realising all his holdings as part of settlement in line with the Securities and Exchange Commission (SEC) mandate to the company to settle all the grievances causing issues with its majority shareholder.

Consequently, the month-to-date and year-to-date gains increased to 2.9 per cent and 7.4 per cent, respectively.

The positive performance of the market was driven by price appreciation in large and medium capitalised stocks which are; Nestle, FBN Holdings (FBNH), Conoil, Honeywell Flour Mills and Zenith Bank.

This week, analysts at United Capital Plc said, “We expect a sideways market, with a bias towards the bias, as we expect continued investor profit-taking on gains from the nine months earnings season.

“Additionally, market participants will be watching the fixed income space.”

The market closed positive with 18 gainers in contrast with 16 losers.

Honeywell Flour Mills drove the gainers’ chart in percentage terms with 9.73 per cent to close at N3.72 per share.

On the other hand, The Initiates Plc led the losers’ chart in percentage terms by 9.76 per cent to close at 37k per share.

UACN Property Development Company followed with 9.74 per cent to close at N1.39, while FTN Cocoa processors declined by 9.09 to close at 40k per share.