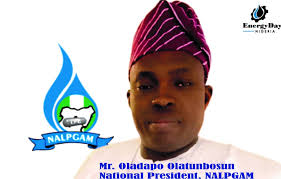 NALPGAM Attributes Profiteering, Devaluation as Major Causes of Hike in Price of LPG

………..by Abisoye Shola…….
The Nigerian Association of Liquefied Petroleum Gas Marketers (NALPGAM) has cried out to the Federal Government on the skyrocketing price of domestic gas in Nigeria as it attributes Profiteering and the Devaluation of the naira as the major causes of hike in price of Cooking gas.

In its letter to the Honourable Minister of State for Petroleum Resources Chief Timipre Sylva signed by its national president and executive secretary, Mr. Olatunbosun A. Oladapo and Mr.Bassey Essien respectively, NALPGAM laments that despite the efforts of government to increase local production of LPG, the bulk of LPG consumed in the Country largely imported.

Noting that the availability of LPG is 65% to 35% in favour of imports, the body identified devaluation of the naira, inability to access foreign exchange by importers, the increasing international price against which the cost of domestic LPG is indexed as well as the anticipated re-imposition of VAT and customs duties with the retrospective application as factors which have all contrived to push the price of LPG upward. It noted that a 12.5kg gas which sold for N3,000.00 in January 2021, now sells for between N10,000-N10,200, depending on the area of the country, and warned that the daily galloping price of gas if not properly handled may derail the lofty ideals of the Gas Expansion Plans of the government.

Further explaining the increase, the association noted that the cost of 20MT of LPG had increased from N3.4m in January 2020 to N11m in October 2021 without any signs of abatement, with majority of LPG consumers now reverting to the use of kerosene, charcoal, and firewood. NALPGAM recognizes the direness of the need to save the Nation has from the impending social upheaval consequent upon LPG getting out of the reach of the masses whose disposable income can no longer afford the purchase of even firewood to cook, despite the obvious known health and environmental implications.

To urgently address the situation, the association recommends that the Minister should use his good offices to explorestrategies including guarantee by the Central Bank of Nigeria(CBN) of a window for importers of LPG to source foreign exchange at a rate that would ensure the resulting price of LPG will be readily affordable; immediate suspension of the re-imposition of VAT and customs duties on imported LPG; pricing of LPG produced by NLNG on the local currency and not against the dollar, and for NLNG to resolve the issue of middlemen in their distribution chain who have capitalized on the inadequate supply of LPG to profiteer.

Noting the evident absurdity in LPG produced by Kwale Hydrocarbon in Delta State being ranked in price as importedLPG, the association called on Mr. Sylva to bring the plight of the citizens concerning the skyrocketing price of cooking gas to the attention of His Excellency, the President of the Federal Republic of Nigeria, for his approval to declare a state of emergency on cooking gas.