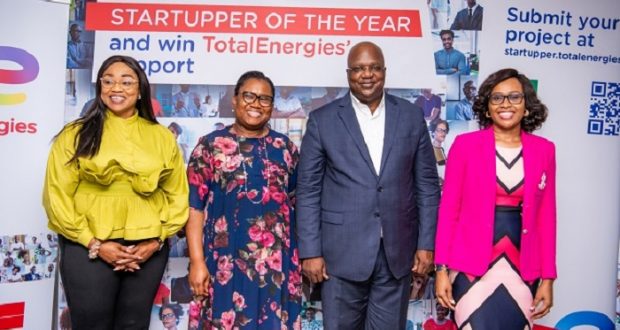 TotalEnergies, a broad energy company that produces and markets energies, has openly declared its intent to begin its third edition of StartUpper challenge during a virtual briefing.

The ‘StartUpper of the Year’ challenge by TotalEnergies, launched in 2016, is a socio-economic development initiative operating in all 32 countries where TotalEnergies runs worldwide to identify, reward and provide support to the best business creation and business development projects under two years of existence in Nigeria by Nigerians between the age bracket between 18 to 35 years.

Speaking at the event, Mrs Olubunmi Popoola-Mordi, Executive General Manager, TotalEnergies Country Services Nigeria, while illustrating how the challenge would take off noted that the three basic evaluation criteria to ascertain an idea for an application for the challenge is that, it must be a response to one of the 17 Sustainable Development Goals (SDGs) as defined by the UN, as this is part of the company’s support in working towards the UN defined SDDs; the innovative character of the project, it does not have to be technological; and the feasibility and/or development potential for the challenge.

“This initiative is a desire to support young entrepreneurs in Africa. We would be having three categories of winners. First is ‘the best business creation project’, second, ‘the best startup under three years old, ‘the best female entrepreneur’. Each winner would receive a five million naira financial support, personalised coaching by experts, and media visibility. Winners would be open to visibility and a networking opportunity. In Nigeria, this year, one of the three categories would be insulated for women only.

“The third category in Nigeria’s section would be best business creation project, the best startup under third years old, best female entrepreneur. While the grand winner in the African category is the best business creation project, grand winner best start-up under three years old, grand winner best female entrepreneur. There would be three winners per country and three grand winners for the African continent. The call for projects to participate in the challenge would be open for seven weeks from November 4 to December 23, 2020.

“Selected participants would have a personalised page on the Startupper challenge website where they would have an opportunity to boost their application during the ‘share for like’ to pick the top 15 finalists this would make give an audience for people to have a glimpse of their innovative idea; this would run from the January 21 to February 4, 2021. Thereafter, there would be a segment where participants would have an opportune moment to present their project or business idea in front of a jury of experts; this would last from February 28 to March 15, 2022. Subsequently, three grand winners would be selected among the national winners to win TotalEnergies support on April 18, 2022,” she said.

Among other winners who had won the startUpper challenge in the past is Opeyemi Owosho who runs Fitco Technology (FITCO). The manufacturer of table-top gas stoves locally in Nigeria. Owosho, while commending the effort of TotalEnegies in regards to the StartUpper challenge, noted that the challenge prompted the launch of the Home Fort table-top gas cooker which is made in Nigeria.

Share about us
2021-10-29
admin
Previous: Energy Transition Must Be Done in a Collaborative Manner – Seplat Boss
Next: PIA : MOMAN Seeks Collaboration with New Regulatory Agency