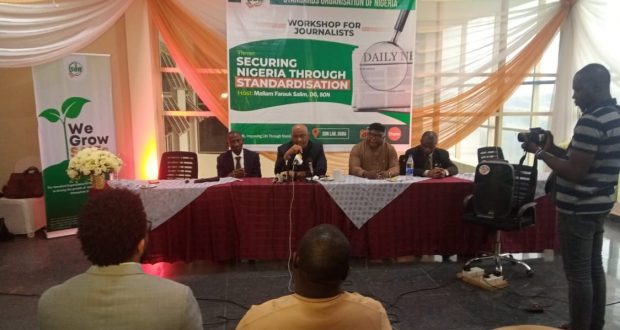 …… Decried the use of substandard petroleum products which are Life threatening……….

The Director General of Standard Organization of Nigeria (SON) Mallam Farouk Salim has said that anytime standards are compromised it leads to economic crisis that brings about unemployment and insecurity in the nation.

Speaking in Lagos during a media parley Salim appealed to the media to assist in educating and creating the awareness of the dangers of sub standard products. He explained that the public need to know how substandard products could be a risk to the users and should not be allowed in homes.

For instanced he noted that before now SON has been collaborating with the Department of Petroleum Resources ( DPR) to stop the use of substandard petroleum products. According to him substandard Petroleum Products are Life threatening and should not be allowed into Nigeria. Salim decried the flooding of the domestic market with substandard LPG cylinders.

In their presentation at the media parley SON officials also noted that refurbished and substandard gas cylinders have found their ways into the Nigeria’s market. The SON officials pointed out that these products portend danger to many users in the country.

The Head of Liquefied Petroleun Gas (LPG) at the SON, Engineer Williams Okpeh, said some LPG sylinder in circulation are fabricated locally with no recourse to standard .
.
Okpeh who, represented by Engineer Ayiti Edward Akinwale, noted that the SON has also uncovered the antics of some producers who usually convert the compressors of refrigerators to cylinders.

“These can not withstand the pressure of gas. The implications of this include the fact that lives and properties are at risk.
“some of the LPG Cylinders in circulation are refurbished. This is an exposure to injury, with imminent loss of lives and properties.” he said.

Corroborating Okpeh’s view, Engineer Abner, Head of Oil and gas, and directoeate of training, SON, stated that cylinders manufactured in the 70s are still in the Nigerian market, insisting that cylinders only have a 15 year lifetime.

“I am sure if you go to the market you will still see Cylinders of the 70s in the Nigeria market circilating. They are still there,” he said.

Abner, maintained that the oil and gas sectot is bedevilled with a number of challenges, “which include wrong base oil usage, base oil usage in lubricants, high sulphur content, poorly refined crude that have found their ways to Nigeria market as well as adulteration of kerosene.”

SON, he stated, acquired hand-held kits since 2012 for white products quality monitoring where samples were tested in Petrol stations country-wide.

“SON initiated collaboration with DPR to have testing-vans that would be useful. In 2014 there were series of concerns raised on Domestic LPG quality

“High pressure due to high content of Propane and butane.

“As a result, explosions were rampant with the quality of cylinders and accessories suspected to be responsible.

“SON analysis results were presented for stakeholders discussion. Standards were revised for both the LPG cylinders and domestic LPG.

“The primary control was placed on the vapour pressure which was maintained at 7.0 Bars

“Codes of practices were developed and approved for the LPG dispensing stations/Plants for use by relevant authorities to monitor activities at that level.”

On sulphur content in fuels, Abner said; “In 2016 Federal Ministry if Environment (FME) led by the current Deputy Sec Gen. Of UN, Mrs. Amina Muhammed, sought to raise quality of fuels, and it then commenced stakeholders engagement.

“Some of the products had sulphur as high as 2000ppm. West African countries keyed into the vision of maintaining the sulphur level.

“At some point we beat this down to 200 ppm and 150ppm. We discovered that even our refineries could not meer up. The minister went to the President to get a waiver for them. As at today, I dont know the level because it is at the level of government.

“All the private refineries including the Dangote have been asked to key in to this. Dangote, fir instance, is to produce at 50ppm (pass per milliion)” he concluded.