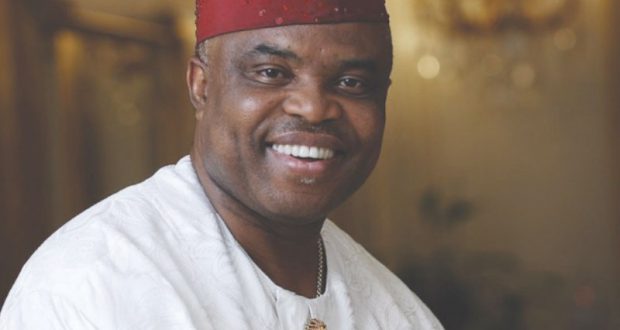 Calm. Collected. Perceptive. Foresighted. Like the lion, he moves without thumps, but his footprints are seen the world over, even on rocky and uncharted business paths. His footsteps reverberate in the land of the spirits. Nothing about his temperament betrays the fact that this is one of the Forbes Magazine rated super rich. He is Dr. Ambrosie Bryant Chukwueloka (A.B.C) Orjiako, a Specialist Orthopedic Surgeon-turned businessman and Chairman of Nigeria’s foremost indigenous oil and gas firm, Seplat Energy PLC.

St. Ignatius Loyola, the founder of the Society of Jesuits, usually ended his letters to the Jesuits with the Latin expression, Ite, inflammate Omnia, which translates to “Go, set the world on fire”. But then, as the Jesuit General Congregation’s decree on the Jesuit charism is known, there is also A Fire that Kindles other Fire. That is who Dr. ABC Orjiako is, as he lights virtually every sector of the Nigerian economy with the flames of his Midas touch, intellect, irreproachable character, enterprise, and grace.

Born 61 years ago, Ojiako graduated from secondary school with Grade 1. At the University of Calabar, where he studied Medicine and Surgery, he came out in flying colours as the best graduating student. He began to cultivate and manifest the leadership roles of today early in his life as an undergraduate. He was the Director, African Region, International Federation of Medical Students and Chairman of the Standing Committee on Education, African Medical Students Association.

Meanwhile, he proceeded to the University of Lagos Teaching Hospital (LUTH) where he underwent specialty training in Orthopaedic Surgery and Trauma Management. A decade later, he had qualified as a Fellow of the West African College of Medicine and went on to become a Fellow of the Nigerian Postgraduate Medical College where he stood out in the practice.

Orjiako comes from a business family; hence it was not surprising that he started showing interest in building businesses even while in medical practice. And he has never looked back since he laid his hands on the plough. He has been breaking new grounds. From the oil and gas industry to the pharmaceutical, shipping, maritime, banking and insurance, real estate, etc., the gentle giant has singlehandedly or in partnership with like-minds, nurtured great businesses and brands within and outside Nigeria. Bloomberg and Marketscreener list over 13 local and international firms where he is either the Chairman or a Director.

As rightly pointed out by the American magazine mogul, Luce, “Business… is an instinctive exercise in foresight”. And indeed foresight is a flair that has always put Orjiako ahead of the time. If he was born a Jew, he would probably have been of the ancestry of Issachar described at 1 Chronicles 12:32 as men, who understood the signs of the times and knew the best course for Israel to take. Over time, Orjiako has primed this gift through experience, daring spirit, informed decision-making, and grace.

Foreseeing that the International Oil Companies (IOCs) would be divesting more with the coming of the Petroleum Industry Act and in view of their seemingly intractable no-love-lost relationship with host communities ABC joined forces with like-minds to found the Seplat Petroleum Exploration and Production Company in 2009. He also became the pioneer Chairman of the Company, which metamorphosed to Seplat Energy PLC in June 2021, and has meritoriously remained the Chairman till date. In this position and working with one of the best teams in the world, ABC has been able to help midwife Seplat’s growth from strength to strength to strength and march to the top of the pack in the industry.

Today, Seplat is a resounding success: Five Oil Mining Licenses (OML); over $2.8 Billion in assets; about $500 Million in market capitalization; listing on both the London Stock Exchange and Nigeria Stock Exchange since 2014, the first ever by a Nigerian company; and has spent about $71 million to deliver services to host communities as part of its Corporate Social Responsibility. By 2019, Seplat, under Orjiako’s leadership had also completed acquisition of the entire issued share capital of Eland Oil and Gas, the first acquisition of a UK listed firm by a Nigerian company.

Meanwhile, energy expansion is inevitable for Nigeria. The country’s 200 million population will more than double by the year 2050, hitting about 450. The country’s access to energy, which currently stands at 60 per cent is expected to reach 100 per cent by 2030. The per-capita energy consumption, which presently stands at less than 150kwh/year compared to global average of 2, 674kwh/year is expected to increase. Increase in new national wealth will also inevitably drive consumption through economic development, while the multiplier effects will boost energy demand.

Thus, Orjiako’s foresight is very manifest in Seplat’s ability to see gas as the next big thing in the nation’s energy transition process, and then launching headlong into gas processing ventures, as the company aims to become the leader in this unavoidable energy expansion.

Why gas? It is projected that the nation’s enormous gas reserves will support this leap in electricity demand. And gas itself is no doubt the ideal transition fuel on Nigeria’s road to renewable energy. It has the greatest potential to achieving the United Nations Sustainable Development Goal (SDG) No. 7, which aims to provide universal access to energy by the year 2030. Massive expansion of gas-for-energy will meaningfully reduce Nigeria’s reliance on home and business electricity generators, which are fuelled by higher emission diesel or premium motor spirit. Reduction in use of diesel will consequently release personal and business wealth for more productive uses in Nigeria’s economy, with multiplier effects on the nation’s GDP. Furthermore, increased use of gas at grid level will reduce emissions and particulate pollution compared to equivalent diesel. The development of liquefied petroleum gas (LPG) market will cut down widespread use of biomass for cooking, hence help in achieving health and environmental benefits.

Consequently, Nigeria’s gas demand will grow by 20 billion cubic metres (BCM), propelled by population surge, higher demand for air conditioning pushed by increase in GDP, 40 per cent increase in access to energy by 2030, and the fact that gas energy is more economical than energy from diesel. And it is against this backdrop that Seplat’s foresight, under ABC Orjiako’s leadership, to channel investments in this direction since years ago can better be understood. With this benefit of foresight, Seplat is today a leading producer and gas supplier to the domestic Nigerian market. Seplat provides 30 per cent of Nigeria’s domestic gas supply for electricity. Today also, Seplat has assets and gas infrastructure well located within the proximity of key demand centres and commands well-established off-takes base with long-term contracts. These include: 10-year contract with Sapele Power Plant for 50 million standard cubic feet per day (MMscfd); 10-year contract for 80MMscfd with Geregu Power Plant; 15-year contract for 116MMscfd with Azura Power, just to name a few.

Also, Seplat has become government’s and Nigeria Gas Company’s partner of choice in Strategic Gas Initiative as exemplified in the multibillion-naira Seplat/Nigeria National Petroleum Corporation (NNPC) gas plant project – ANOH Gas Processing Company (AGPC). In February this year, Seplat raised $260million through a consortium of banks, being its obligation towards the $650million financing for the ANOH Gas Processing Plant (a record equal ownership Joint Venture with the Nigeria Gas Company, a subsidiary of the NNPC). It is expected to deliver the first gas to the market in the first half of 2022.

With mini-grids and solar home systems expected to play a key role in unlocking universal energy access in Nigeria, Seplat has already created a New Energy unit. This sets Seplat ahead in exploring the potential for renewable energy in Nigeria, which presents about $13 billion opportunity.

Seplat cares about the present and future generations, supporting the Climate Action, not only through massive investment in gas infrastructure to reduce greenhouse gas emissions, but also by working to stop gas flare and ensure low-carbon future operations. For instance, it plans to eliminate gas flaring at its Sapele Gas Plant by 2023.

In addition, Seplat has developed emissions calculator in accordance with the American Petroleum Institute (API) compendium of greenhouse gas emissions methodologies for the oil and natural gas industry (2009) to help the company better understand and manage its carbon footprints more meticulously.

In its tradition of thinking ahead, setting agenda, and contributing to the efforts at confronting Africa’s power deficit in a world gravitating toward energy transition and where Climate Change, Environmental Sustainability Governance, and Policy Changes are dominating the energy discourse, the company, in 2020, launched the Seplat Energy Summit (SES). The 2021 edition is themed “Global Trends in Energy Transition and the Africa Perspective”.

As earlier stated, whatever Seplat has achieved under the leadership of Orjiako has been possible because the company attracts and retains about the best hands from around the world.

It can also be said that at 61, his name leads him. Anyone, who understands the place of names and Chi (personal god or what Chinua Achebe calls the double-spirit) in Igbo cosmology, knows that the Igbo, East of Nigeria, believe that a child’s destiny is tied to its name. So, when the late Sir Obiesie Orjiako and his wife, Rebecca Orjiako, of Umuchima, Uli, Anambra State, named their son Chukwueloka (literally translates as God is the master planner or God has planned big for us), they only released the prophecy that ABC Orjiako manifests today.

But the Igbo also strongly believe in industry. According to them, if a man says “yes”, his Chi equally says “yes”. Thus, in Orjiako, you find a man, who said yes to his Chi through his dint of hard work, character, and foresight.

Meanwhile, the way to the top is never smooth. Staying at the top is even more challenging. But even as small as a sparrow appears, it has never been blown off from the tip of palm frond because its Chi has placed it there. A man led by his Chi does not fall into a ditch. Those who invoke rains and storms on the eagle end up accentuating eagle’s splendour and might.

Happy birthday to a visionary entrepreneur, philanthropist, and the far-seeing eagle that is always ahead of the time.

Share about us
2021-10-06
admin
Previous: Africa Petrol Refiners to Discuss Energy Transition at 2021 Conference Week
Next: Aiteo Slams $2.5 Billion Suit Against Shell Over Sale of OML 29