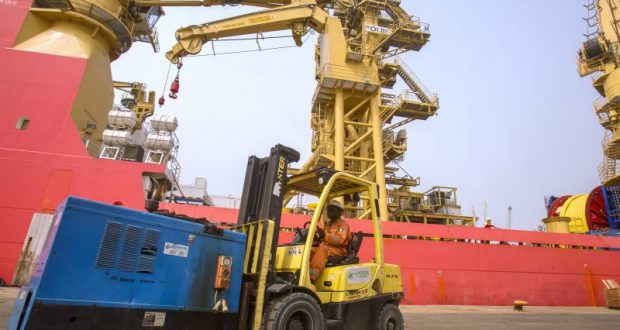 LADOL Free Zone has set another ground-breaking record as the company and Mammoet performed the first heavy lift project in West Africa using the MTC 15 shore crane – the largest of its kind in the world.

LADOL in a statement said the heavy lift project involved the offloading and launching of a multi-Cat 320-ton vessel into the water using the MTC crane.

“The successful use of this crane opens up a new era for heavy lift operations in West Africa. Using the MTC crane, installed at LADOL’s quayside, means that a major impediment to 100 per cent local vessel fabrication and other large industrial projects taking place in Nigeria has been eliminated.

“Many Ports across the world, from Europe to America lack the heavy lift capabilities now installed in Nigeria. This automatically makes Nigeria the heavy lift hub for West Africa. This giant step forward in maritime and industrial capabilities also comes with a 40 per cent – 50 per cent cost saving.

MTC -15, it added, is the biggest installed shore crane of its kind in West Africa and has transformed its quayside into a heavy lift terminal.

“Recall that in 2020, LADOL and Mammoet signed a strategic partnership, aimed at expanding LADOL’s capacity for project cargo handling and logistics for industrial sectors in West Africa. It enables LADOL to utilise Mammoet’s crane fleet, project cargo handling and heavy lifting expertise along with project management services to provide clients with more comprehensive and cost-effective solutions,” the statement reads.

Commenting, Managing Director of LADOL, Dr. Amy Jadesimi said: “I’d like to thank all the stakeholders involved in enabling us to reach this momentous milestone and I’d like to thank the staff and management that worked 24 / 7 on this project and ensured that it was done safely and expeditiously at LADOL.”

In his comments, LADOL’s SHEQ Manager, Mr. Michael Onobiokor said: “We want to appreciate everyone for the exemplary safety leadership that was demonstrated during this critical lift. The full cooperation and compliance of all those involved demonstrated the truth and commitment we all have to putting Safety First.”

LADOL’s Executive Director, Business Development, Jide Jadesimi, said: “On the 7th of September 2021, the air was full of excitement and anticipation, history was being made with the first ever heavy lift of its kind by a terminal in Lagos Harbour. The Mammoet MTC 15 heavy lift crane, hoisted the 320-ton boat into the air, from the deck of the cargo vessel which was berthed at the LADOL quayside. This high-tech lift was carried out by all stakeholders involved in perfect unison.

“The decades of experience, hours of practice, unrelenting hard work and constant flow of communication between all those involved, meant that the project worked like clockwork. We’d like to thank the Nigerian Ports Authority whose marine division supported the project, including the timely and skilled deployment of the NPA tugboats, which were instrumental in accurately manoeuvring the large cargo vessel as the heavy lift took place. We look forward to supporting a range of local and regional projects in the near future.”

Olivier Dirkzwager, Sales Manager Mammoet West Africa, said: “LADOL’s infrastructure combined with the MTC 15 crane – a unique piece of heavy lifting equipment, unlocks the smarter routes for heavy cargo in Nigeria. The successful delivery and the discharge of the multicat is a testament to that and is the first of many more successful projects.”

Share about us
2021-09-21
admin
Previous: Experts to Confer Strategic Pathway on PIA Implementation for Industry Value Addition
Next: Sarki Auwalu, Others Appointed Into Petroleum Regulatory Board