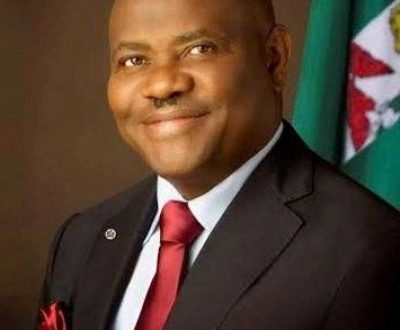 Unrelenting Governor Nyesom Wike of Rivers State has set eyes on his administration’s collection of $750Million VAT to accrue from the $10Billion Nigerian Liquefied Natural Gas (NLNG) Train 7 development.even as the Abuja Court of Appeal judgement restrained the State Government from collecting Value Added Tax (VAT) and sundry taxes in the state,

In a statement by his Media Aide, Kelvin Ebiri, over Sunday’s sendoff ceremony in Port Harcourt for out-gone NLNG Managing Director, Tony Attah, the Governor was quoted as saying that, “the 7.5 VAT from the NLNG Train 7 project, will be used to transform the State.”

The figure would amount to $750Million, being 7.5% VAT on the total budgeted Train 7 construction cost of $10Billion.

Wike on the occasion harped on the delayed completion of the N120 Billion 38Km Bonny-Bodo Road due to failure of Federal Government to fulfill its N60Billion counterpart funding for the project.

“If this country is a country that all of us belong to and all of us mean well for ourselves, that is one project that ought to have been completed by now, because of the economic interest that will benefit all of us.”

On the legacy of immediate past NLNG MD, Wike said Attah will be remembered for overseeing delivery of NLNG corporate headquarters complex in Port Harcourt while ensuring that all fabrication works for the company’s $10 billion Train 7 were done in Rivers.

He said by ensuring speedy completion of the NLNG headquarters in Port Harcourt, Attah had proven that the claim of insecurity in the Niger Delta by IOCs is indefensible.

To the new NLNG MD, Dr. Philip Mshelbila, Wike advised he emulates his predecessor to sustain the existing cordial relationship with the state government.

He further urged, “Everybody should come back here (Rivers).This is where it is happening. Philip, opposite you, we have sand filled the area, provided infrastructure. Come and partner with us.

“Chairman (NLNG Board, Edmund Daukoru, the Amayanabo of Nembe) you are from Niger Delta. Tell your people to come and get a place here. They should not be living in Lagos and flying in and putting the cost on your head. Let them come here. The safest place is here. Rivers state is very safe.

The governor used the occasion to reaffirm Rivers State government ownership of OML 11 which was formerly operated by Shell Petroleum Development Company.

Share about us
2021-09-15
admin
Previous: NNNPC Subsidiaries to Embark on Cost-Cutting Measures
Next: We facilitated N802.82 Billion Domestic Borrowing in 2019 – DMO