Home » Refinery » Dangote: Only A Third of NNPC’s Investment in Refinery Will Be Paid in Cash 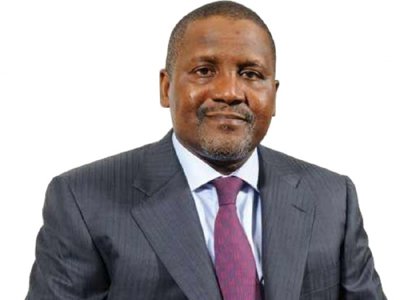 Dangote: Only A Third of NNPC’s Investment in Refinery Will Be Paid in Cash

……..Project will save country scarce forex, says Emefiele…..
Africa’s richest man and the President of the Dangote Group, Alhaji Aliko Dangote, yesterday disclosed that the 20 per cent equity taken by the Nigerian National Petroleum Corporation (NNPC) in his much-awaited refinery will not be paid in a single cash transaction.

Speaking during a documentary aired on Arise News Channel, THISDAY’s broadcast arm, the renowned philanthropist noted that while a third of the $2.7 billion deal would be paid in cash, the second would be through crude sales and the third would be through profits made by the corporation.

He noted that there’s a lot of misconceptions around the planned 20 per cent equity holding by the national oil company, explaining that the deal also involves all the products to be churned out by the $19 billion facility, including petrochemicals.

Revealing that he got the inspiration to build the refinery from India, given what he described as the painful situation whereby Nigeria, a country of over 200 million people importing all petroleum products needed for consumption.

He pointed out that the project currently employs 29,000 Nigerians and 11, 000 foreigners with plans to ramp up the number to 57,000 in the coming months.

The 650,000 barrels per day refinery, located in Lagos is expected to start operation in the first half of next year, with the NNPC in the process of buying 20 per cent of the refinery.

Stressing that the refinery is capable of meeting the country’s entire petrol, diesel and jet fuel needs, Dangote posited that as it stands, the country expends about 25 per cent of all its import bills on bringing in petrol products into the country.

The businessmen lamented that Nigeria lost between $50 billion to $60 in investments to the delayed passage of the Petroleum Industry Act (PIA), but explained that with the recent presidential assent, investors who had been sitting on the fence are now expected to move into the country.

“So, these are the things that people don’t really understand and I want to really clarify it. When they talk about the $2.7 billion, you know, they (NNPC) are paying one third of the money.

“Another one third of the money, again, will actually be paid through supply of crude, with the deduction of maximum of about $2 and some cents. And then the one third of it, which is another $850 to $900 million will be paid from the profit they are going to make from the business.

“So it’s not a cash transaction where they are paying all cash. You can see that if we don’t have confidence in what we are doing, we would have asked them to pay all cash,” he stated.

Dangote mentioned that one of the benefits of the refinery to Nigeria would be to stabilise the country’s currency, because as of today, about 25 per cent of the country’s foreign exchange goes to importation of petroleum products.

He noted that if the country was to spend $8 billion to $9 billion for imports, for instance, that money would be saved because the refinery has the full capacity to meet every energy need of the country, whether petrol, diesel or aviation fuel, with a lot left to export, thereby generating a lot of foreign exchange for the country.

“So you can see the difference, even our own balance of trade will change, it will strengthen also the naira because we’re not going to have this massive avalanche of dollars going out for importing finished products of our own raw material.

“This refinery that we built is very important and is going to help transform not only the oil sector in Nigeria, no, it will transform the entire economy of Nigeria, it will put millions of people directly or indirectly at work.

Dangote added: “It makes me feel terrible to see a country as big as Nigeria, as resourceful as Nigeria and with this sort of population that we have 200 million plus, we’re importing all our petroleum products. I mean, it is very painful.

“So with that, I thought in my mind, and I said that somebody has to address this issue. We tried before, in 2007 like what I said earlier on, but the government of that day changed their minds, and then we jettisoned the idea and returned them.

“But right now, we came back with the support of the government to make sure that yes, we help in addressing this issue of not only Nigeria. Because I’m a Nigerian and I’ve benefited quite a lot from Nigeria and if there are issues to be sorted out, I should be one of those who will bring solutions to our national problems.”

According to Dangote, the refinery project remains the biggest in Africa today and one of the biggest in the world, adding that a lot of Nigerians were getting massive training as a way to build in-country capacity.

With the expected operationalisation of the Petroleum Industry Act (PIA), Dangote expressed confidence that investors would be attracted to the country, because before now, there was no incentive.

“Before, there was no clarity, people were not really very ready and willing to put in their money. If you look at it, in the last couple of years, there has not been investment. We have lost more than $50 billion to $60 billion worth of investment,” he noted.

On reasons for accepting NNPC’s 20 per cent equity, he explained that it wasn’t possible for the government to sit back when a massive project like the refinery is ongoing because of the need for energy security, assuring that in three or maximum four years, NNPC will recoup its investment.

“People keep talking about the refinery, they didn’t buy only the refinery, they bought refinery with petrochemicals. I could have actually decided to do like some of my my mates here in Nigeria and just keep my money in the bank or keep the money abroad.

“But you know I’m very, very passionate about Nigeria and making Nigeria great. If it’s just Dangote group making money, I would have just kept that money and participate in capital markets abroad where my money is in dollars and I am making money, but no.

“We know as a country we have challenges, how do we address these issues. The only way for me is not to sit and be criticising, no, I should be part of the problem solvers and part of the change. My prayer is that I will give most of my wealth when I am alive,” he said.

Also, the Governor of the Central Bank of Nigeria (CBN) Mr. Godwin Emefiele, who spoke in the documentary explained that with the coming of the refinery, Nigeria would save a lot of its foreign exchange that’s currently being used in importing refined products.

“Our own selfish interest is that this will help to achieve our import substitution objectives and on this, you’re talking about goods that are currently being imported into the country with scarce foreign exchange, that we will now begin to produce them locally, thereby saving foreign exchange that the central bank would have spent importing or funding the importation of these items.

“At every opportunity that I have visited that project site, I get encouraged and I seize the opportunity of those visits to encourage even other Nigerians or other businesses, whether local or foreign, that Nigeria has a lot of potential and as long as people can contemplate this kind of projects, they will receive the needed support from the CBN for the importation of plants and equipment.”