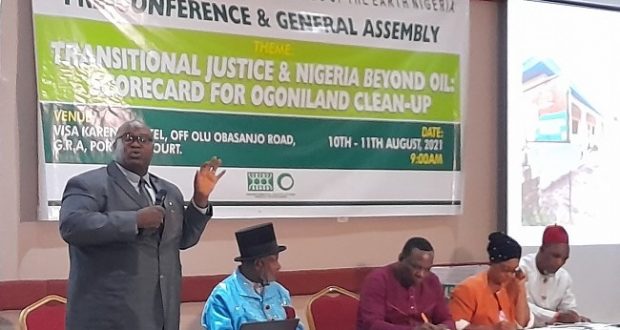 The federal government had maintained over time that Nigeria is not in a hurry to abandon her huge petroleum resources and the development and rush into net- zero carbon emission technology.

For instance the Minister of State for Petroleum Resources, Chief Timiprya Sylva had insisted categorically that Nigeria’s approach towards the climate-change-net-zero-emission debate is to optimize the use of its abundant gas resource domestically as a transition fuel option towards meeting nationally determined contributions on climate change

But the Environmental Rights Action/ Friends of the Earth Nigeria (ERA/FoEN) has expressed the need for African countries to urgently embrace renewable energy sources so as not to be left behind in the ongoing rapid global movement from dirty energy to clean energy.

ERA/FoEN stated that time was running out against African countries in catching up with the rest of the world by their slow approaches to accepting and investing in Renewable energy.

In Africa they said, there is the genuine fear of energy colonialism if all the disused and obsolete energy systems and petrol engines and vehicles are shipped to Africa as Greek gifts or even for sale.

“This means that the third world countries would be a dumping ground which will have serious impact on the environment, health and general wellbeing of the people” Executive Director of ERA/FoEN, Dr. Godwin Uyi Ojo said.

Ojo noted in his keynote address titled: “Transitional Justice and Nigeria Beyond Oil” during the opening of a two-day conference on Climate Justice in Port Harcourt, Rivers State, on Tuesday that there is the need for African countries, particularly Nigeria, to divest funds from fossil fuels to renewable energy.

Ojo said that whereas on a global level, countries are making comprehensive plans to transit from fossil fuels to renewable energy sources and cleaner technologies by the year 2030 in line with the Paris Agreement of 2015, Nigeria was still neck deep in seeking investments for oil prospecting.

“How will Africa react to this pending crisis waiting to happen and how will the rich countries respond to this during the COP 26 coming up in Glasgow later in the year?” Ojo demanded.

“Transitional justice requires that rich countries pay ecological debts to compensate for Nigeria’s stranded assets such as oil and gas reserves, account for the historical carbon emissions released into the atmosphere and address loss and damage for fairness and equity including payment of compensation to victims of climate change,” Ojo further stated.

While reasoning that Nigeria beyond oil is very feasible with several benefits accruable to the country, the Executive Director of ERA/FoEN noted that his organisation and its allies including civil society groups, community-based organisations, community representatives across Nigeria have recognized the urgent need for energy transition from fossil fuels to renewable energy.

He, however, expressed displeasure over the slow migration from dependence on fossils by the federal government which is still neck deep in seeking investments for oil prospecting especially in the Gongola/ Chad Basins and has committed billions of dollars to the expansion of Nigeria’s oil and gas reserves.

“Is this the right move for Nigeria? This shows that Nigeria is not ready for a post petroleum economy, he wondered.

Ojo insisted that the disadvantages of fossil fuels are far greater than their advantages whereas renewable particularly solar energy has all round advantages without any dangerous impact on the users and the environment.

“The divestment of public finance, loans and subsidies from fossil fuels and investing them on renewable energy development and development of cleaner technologies offers the opportunity for a post petroleum Nigeria,” Ojo concluded.