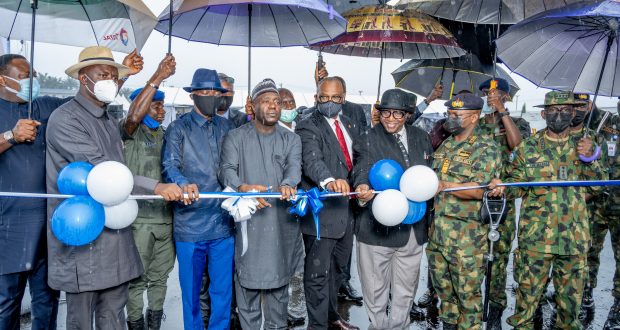 The Aiteo Group, one of Africa’s fastest-growing energy leaders has delivered some High-Tech Marine assts to the Nigerian Navy to equip them in the fight against pipeline vandalisation.

Receiving the items on behalf of the Buhari-led Federal Government of Nigeria, the Navy Chief, Vice Admiral Awwal Z Gambo, said the resources would be deployed to the creeks to fight oil theft, piracy and sea robbery specifically along the NCTL right of way.

He opined that the donation was the manifestation of months of collaboration with critical maritime stakeholders to support naval operations.

“The delivery of these platforms and assets align with the provisions of the Nigerian Navy’s 2021-2030 strategic plans on inter-agency and sub-regional cooperation. This is a milestone in our collaborative engagement with corporate maritime stakeholders to rid the nation’s maritime environment of criminal elements and economic saboteurs.

He commended Aiteo for the highly patriotic donation at this crucial time, considering the on-going war against insecurity.

Present at the event is the Chief of Defence Staff, General Lucky Irabor, who said that the new resources would be deployed to complement other internal security operations across the country.

The defence chief gave assurances that the marine vessels would be used for their set objectives of securing lives and property, including the nation’s oil and gas installations.

In his remarks at the event, Governor of Rivers State, Barrister Nyesom Wike, represented by the Secretary to the Government of Rivers State, Dr. Tammy Danagogo, expressed appreciation to Aiteo for the donation.

In his address, the Executive Vice Chairman and founder of Aiteo, Mr. Benedict Peters, said the company decided to donate the equipment to the Navy, owing to frequent attacks on critical oil and gas facilities by vandals. Mr. Peters, who was represented by Aiteo Global Group Director and Co-Ordinator, Asset Protection, Security Services and Community Matters, Chief Andrew Oru, expressed enthusiasm that the donated resources would further complement the Federal Government’s efforts at mitigating the risks earlier highlighted.

“Aiteo Global Group believes that the Nigerian Navy stands in the best position to address this menace if adequately equipped and supported . Consequently, it is our expectation that the contribution of these hardware would be a source of further motivation to our gallant Nigeria Navy leadership and personnel as they secure our waterways and restore National pride, security and cohesion” he added.

Significant stakeholders who witnessed this grand commissioning include, the deputy governor of Bayelsa State, Mr. Lawrence Ewhrudjakpo, the GMD NNPC was represented by the General Manager, Joint Ventures, NAPIMS, Madam Martina Atuchie, and Director of NOSDRA, Mr. Idris O. Musa. The commander of the Joint Task Force, OPDS, Rear Admiral Aminu Hassan as well as other heads of security agencies made the august gathering.

Share about us
2021-08-06
admin
Previous: Nigeria to Benefit from $19 Billion of PGGW Blames Pipelines Vandal for Delay in Cleanup
Next: Hollyfrontier Buys 678,000 BPD for $2.6 Billion Refinery from Sinclair Oil