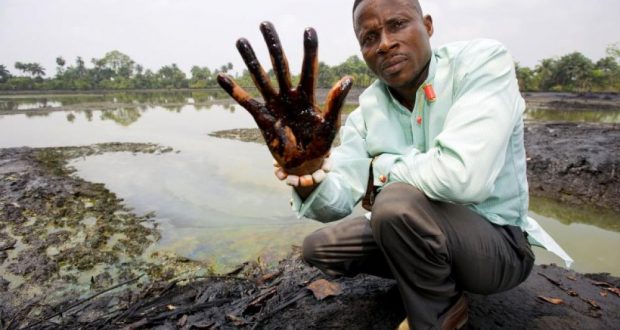 Shell Petroleum Development Company of Nigeria (SPDC) on Tuesday confirmed an oil leak at its facility in Ekeremor Local Government Area of Bayelsa.

Mr Bamidele Odugbesan, its Media Relations Manager, said in a statement the spill, which discharged a yet to be ascertained volume of crude into the environment, occurred on June 15.

Odugbesan dismissed claims by residents that the oil firm was yet to respond to the spill and said that the leak was promptly contained within SPDC’s right of way.

“On June 15, a leak was reported at a facility of the Shell Petroleum Development Company of Nigeria Ltd.’s Joint Venture at Opukushi in Ekeremo Local Government Area of Bayelsa.

“SPDC’s Emergency Response Team was promptly mobilised and it stopped and contained the spill within the SPDC JV right of way.

“Spill clean-up is progressing while the Joint Investigation report is being finalised for sign-off by the team comprising representatives of regulatory and relevant government agencies, the community and SPDC,’’ Odugbesan stated.

Meanwhile, residents of the host communities have decried the pollution caused by the oil spill and claimed that clean-up was yet to be carried out.

The head of the family hosting the oil well, Chief Bidei Oyinmo, called on the Federal Government and relevant regulatory agencies responsible for the protection of the environment and prevention of oil spills to assist.

Oyinmo said that since the spill occurred, nothing had been done to remediate the environment, stressing that the development had negatively impacted the predominantly fishing and farming settlement.

“The SPDC’s oil well No. 24 in its Opukushi oil flow station has been spilling and spreading crude oil into the swamps, creeks, ponds and the Dodo River.

“The spill has threatened our means of livelihoods and made things difficult for fishermen and residents in neighbouring Koromotoru, Azagbene and Bilabiri communities since about a month now,’’ Oyinmo said.