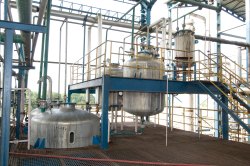 Awolowo disclosed this when he recently hosted the NNPC boss at the Export House, in Abuja.

According to a statement from the NEPC, Awolowo stated that the project signifies the Federal Government’s effort to maximise value and monetise Nigerian vast natural gas endowment, having significant economic and development impact on the country including revenue generation and import substitution for the methanol needs of the country that is currently 100 per cent imported.

He added that the recent passage of the Petroleum Industry Bill (PIB) is also instrumental to driving the growth of the Downstream sector and supporting Nigeria’s diversification from being essentially a mono-economy on oil.

Emphasising that under the Zero Oil Plan, specifically Chapter 10, several MDAs were interfacing and collaborating to effectively drive the diversification of the nation’s economy, the Ministry of Petroleum and the various MDAs are tasked with the responsibility of developing sectoral policies to accelerate growth in production within key sectors such as petrochemicals, methanol, nitrogenous fertiliser and ammonia; and facilitate new investors for the aforementioned sectors.

The GMD of NNPC in his remarks said the visit to the NEPC, the first of its kind heralded a newly strengthened relationship between the two organisations.

He emphasised that the signing of the final investment decision to build Nigeria’s first methanol –processing plant expected to be completed in 2024 will create 30,000 direct and indirect jobs during construction and about 5,000 jobs during operation.

He added that “With Nigeria signing of the Paris Agreement and its commitment under the nationally determined contributions to cut emissions by 45 percent in strategic sectors linked to the Federal Government, the policy is expected to drive activities around the gathering of flare gas in anticipation of the construction of large-scale methanol fuel plants with the aim of achieving 100 percent domestic production of methanol fuels consumed in Nigeria by 2025.”

Kyari reiterated the NNPC’s commitment to partnering with the NEPC in ensuring an enabling environment that promotes production, manufacturing and exporting that can improve Nigeria’s foreign reserves.

The NEPC affirmed that it looks forward to a committed collaboration with the NNPC to ensure that an enabling environment for the promotion of non-oil exports is created and sustained.

Share about us
2021-07-11
admin
Previous: Mshelbila takes over from Attah as NLNG’s CEO end of August
Next: Seplat Energy Appoints Two Directors