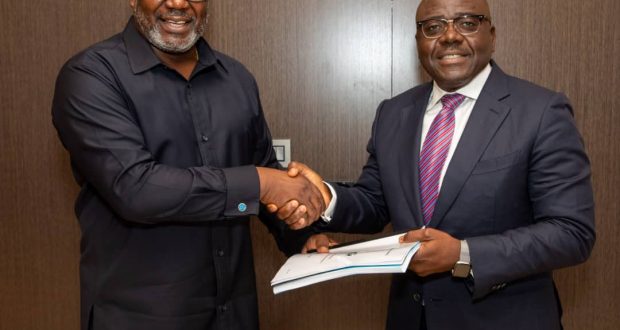 Abdulrazaq Isa, the Co-Founder and Chairman of Waltersmith Petroman Oil Limited, an indigenous Nigerian independent oil and gas producing company has been appointed as chairman of the Governance Council of the Independent Petroleum Producers Group (IPPG).

The appointment of the Waltersmith boss has been ratified effectively from July 1, 2021. Isa takes over from Ademola Adeyemi-Bero who was the pioneer Chairman of the Group from July 2015, having served two terms.

The first leadership transition and hand-over event, since the establishment of the IPPG , took place on the 29th of June, 2021 at the Waltersmith Head-Office in Ikoyi, Lagos, which had in attendance members of the IPPG Board of Trustees and Governance Council.

The outgoing Chairman of IPPG, Ademola Adeyemi-Bero, used the occasion to express his sincere appreciation to IPPG members for the confidence reposed in him and their support throughout his tenure as Chairman of the Group.

“A healthy and vibrant oil and gas sector remains critical for the development of Nigeria and progressive indigenous producers are best placed to ensure greater linkages between the upstream oil and gas industry and the wider Nigerian Economy’’, Ademola Adeyemi-Bero said in his remarks.

The incoming Chairman, Abdulrazaq Isa while thanking his predecessor for putting in an excellent shift during his tenure as IPPG Chairman, promised to take IPPG to greater heights and solicited the support of members to ensure IPPG remains at the forefront of developing the Nigerian petroleum industry. He also noted that due to changing industry dynamics and key industry reforms, it was imperative for IPPG to remain well positioned in order to contribute to the growth and development of the Nigerian petroleum industry by playing a leading role in meeting the cardinal priorities of the administration’s agenda for industry.

‘’IPPG remains committed to working collaboratively with all stakeholders in nurturing a petroleum industry that can take its rightful place in the global space’’, Abdulrazaq Isa, said.

Dr Layi Fatona, a member of the IPPG Board of Trustees, thanked the outgoing Chairman noting that under his tenure, IPPG achieved many significant achievements due to his hardwork and commitment to the growth and development of the Nigerian petroleum sector.

Established in 2015, IPPG is an association of indigenous Exploration and Production (E&P) companies with a current membership of twenty-three (23) companies. The Group was set up to promote and advance the development of the Nigerian petroleum industry. It constructively engages government and other stakeholders with the primary goal of maximizing the contribution of the domestic oil and gas industry to the overall socio-economic development of Nigeria.