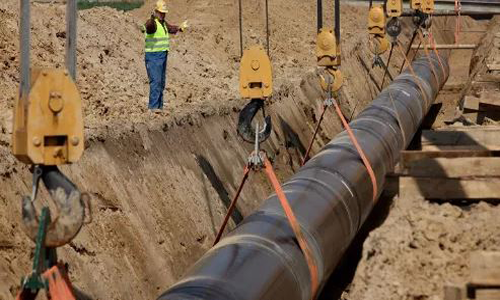 The Federal Government says it is targeting Trans-Saharan and European markets with the ongoing construction of the Ajaokuta, Kaduna, Kano Gas Pipeline, popularly known as AKK Gas Pipeline.

The Minister of State for Petroleum Resources, Chief Timipre Sylva, said that the gas pipeline would be one of the legacy projects of the President Muhammadu Buhari administration.

“So, our gas can move all the way from the South to the European market. So, it is a very important piece of infrastructure and the president is very committed to it and it is very much on track.”

Sylva said when completed, the gas pipeline would also serve as a development backbone along the Southern-Northern corridors of the country.

“AKK gas pipeline is good for producers and the market because we have a lot of situations where gas is capped in the South and not produced because there is no market.

“But what we want to do now is to bring the gas across Nigeria, so that when you are now moving gas from South to North, all the people along that corridor can key into that pipeline.

“This is also good for the producer because he now has incentives to produce more. Before now, the gas in the South was capped but with this backbone, anybody can produce and link up with the AKK pipeline,” Sylva said.

According to him, the construction of the AKK Gas Pipeline will eliminate gas flaring completely in the country as it will absorb the remaining eight per cent currently being flared.

“Today as we speak on gas flaring, it is so much exaggerated. Gas flaring has been reduced to about eight per cent. We have taken down about 92 per cent of flares.

“Gas flaring is no longer the major problem of our communities today. There has been a lot of monetisation on gas.

“We also use some of the gas to spike the crude oil, so we have found a lot of use for gas which brought flaring down by eight per cent, but people still exaggerate it.

“Before now in my own community, I saw the flares in the horizon when I stood by the Atlantic, but today it’s no more.”

Sylva urged communities in the Niger Delta to tap into various opportunities created by the federal government’s gas utilisation projects and stop complaining about the dangers of gas flaring which had almost been eliminated.

“Gas flaring is no longer a problem in the Niger Delta, eight per cent of gas being flared cannot be the problem. If I don’t know what to do with my gas that is when I flare, but if I can monetise my gas, why should I burn it when I can make money out of it.

“In fact, it is in my interest not to burn my gas because it now has value. The problem with gas before was that it has no value because nobody was buying it.

“But now, if I can monetise it, I will be guarding it so that I can get some benefits from it,” Sylva added