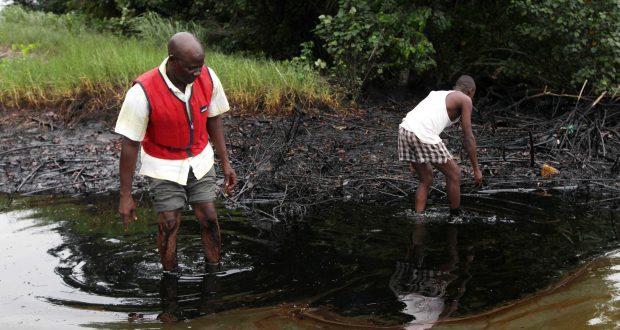 FILE - In this June 20, 2010 file photo, men walk in an oil slick covering a creek near Bodo City in the oil-rich Niger Delta region of Nigeria. Little action has been taken to clean up pollution caused by oil production in Nigerias Niger Delta region, either by the government or Shell Oil, Amnesty International and other groups charged Monday. Aug. 4, 2014. Oil production has contaminated the drinking water of at least 10 communities in the Ogoniland area but neither the Nigerian government nor Royal Dutch Shell's Nigeria subsidiary have taken effective measures to restore the fouled environment, said the new report by Amnesty International, Friends of The Earth Europe, Center for Environment, Human Rights and Development, Environmental Rights Action, and Platform. (AP Photo/Sunday Alamba, File)

The Federal High Court in Abuja has ordered the Mobil Producing Nigeria Unlimited and the Nigerian National Petroleum Corporation (NNPC) to pay the oil communities in Ibeno Local Government Area of Akwa Ibom State a cumulative damages of N81.9 billion over oil spillage.

Justice Taiwo Taiwo, in a judgment debt, ordered that the payment must be paid within 14 days, and failure of which 8 per cent interest would be accruable on the principal sum annually.
Delivering judgment on Monday, June 21, 2021 in a joint suit instituted against the two defendants by the aggrieved oil producing communities, Justice Taiwo held that the American oil company and NNPC were negligent in the way and manner they handled oil spills that caused environmental degradation in the communities.

Taiwo particularly took swipe at the NNPC for being interested in the revenue generations from the oil exploration at the expense of the lives of the people in the communities.

He agreed and accepted that the oral and documentary evidence adduced by the plaintiffs to support their claims that lives were made miserable for them when their water and land were polluted through crude oil leakages from old oil pipelines.

He noted the claims of Mobil that it did clean up exercise and held that the oil giant failed to address the compensation that would have mitigated the economic losses of the people said to be mainly fishermen and farmers.

Besides, the judge described as unreliable witnesses called by Mobil, adding that for no reason they became evasive during cross examination by counsel to the plaintiffs.

He held that the oral and documentary evidence produced by Mobil Company were not in any way helpful to the court as they were targeted at serving predetermined interest.

The judge further said that some of the witnesses ought not to have come to the court at all going by the discrepancies in the documents brought to the court, adding that they only embarked on guess research that was not reliable.

He further held that both Mobil and NNPC were negligent by their failure to visit places of the leakages of the crude oil that led to the contermination of Rivers and creeks.

Justice Taiwo rejected the claims of Mobile joint venture partner, NNPC, that the suit was statute barred in 2012 when it was filed by the aggrieved plaintiffs.

The NNPC had claimed that the suit was not filed within 12 months by the plaintiffs as required by the provision of Section 12, Sub Section 1 of the NNPC Act, 2004.

However, the judge held that the instant suit had to do with fundamental rights that cannot be rendered impotent by the statute of limitations.

He stated further that Section 11, Subsection 5 of the Oil Pipeline Act made it mandatory for oil companies to monitor and repair their pipelines to avoid spillages and environmental degradation.

Ibeno communities led by Obong Effiong Archianga and nine others had through their lawyers, Chief Lucius Nwosu (SAN) brought the action against NNPC, Mobil Producing Nigeria Unlimited and ExxonMobil Corporation.

They had sought about N100 billion compensation for economic losses suffered from oil spillages caused by the defendants during exploration.

The 3rd defendant was however deleted from the court action when the court established that their was no cause of action against it.

Share about us
2021-06-22
admin
Previous: Nigeria Earned N79.96 Billion from Solid Minerals in 2019, Highest in 5 years – NEITI
Next: Decade of Gas : OMAA Leads the Trail With Gas Power Vehicles and Electric Generators