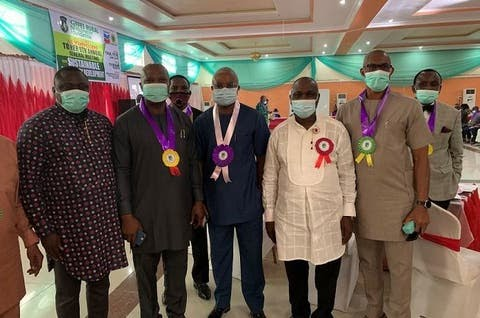 The Chevron has said it spent over N3.5 billion in sixteen years since 2005 to eight community clusters in Southern Ijaw and Brass Local Government Areas in Bayelsa.

The 2020 Annual General meeting could not be held at the time, due to the global lock-down which was occasioned by the COVID- 19 pandemic.

Brinkinn, who was represented by Mr Sam Danibo, Area Manager, Public and Government Affairs, CNL said the oil firm provided the funds under the Global Memorandum of Understanding (GMoU) administered by KRDF.

According to him, the development funds spent over the years went into infrastructure and non-infrastructure projects, including scholarships and human capital development that have added value to KRDF communities.

He assured that Chevron remained committed to its social obligations even in the harsh operating environment occasioned by the COVID-19 pandemic.

“This is a tough time for the Oil and Gas industry globally.

“Nevertheless, Chevron takes its role as a corporate citizen in Nigeria seriously and remains active in many projects that promote health, education and economic development.

“We are committed to the terms of the GMoU. We will carry through on our commitments as contained in the agreements,” he said.

Chairman of KRDF, Mr Mathew Sele-Epri, said the foundation was grateful to CNL for keeping faith and meeting its funding obligations to the GMoU, but appealed for upward review of the funding in view of inflationary trends.

He assured that the communities were committed to peaceful atmosphere and providing a business-friendly environment for oil and gas activities in the domain and urged the youths to support the efforts of the foundation.

Chief Jeremiah Leghemo, the traditional ruler of Koluama 1, applauded Chevron for meeting its social obligations in the face of daunting challenges facing the oil industry and urged other stakeholders to build the foundation to grow to enviable heights.

The traditional ruler urged government officials to refrain from interfering with the selection of community representatives on the KRDF, as it was against the letters and spirit of the GMoU.

“And to the government of Bayelsa, I wish to appeal to state officials in Ministries, Departments and Agencies, including Commissioners and Political appointees, to respect the established practice on ground, in the area of selecting community representatives.

“Deciding who represents a community remains the business and prerogative of the community and no one else.

“No government body, department, politician or any external person has the right to dictate to the foundation or the community who should represent them, “the traditional ruler said.

The state Commissioner for Mineral Resources, Mr. Ibiere Jones, in his remarks, urged the foundation to collaborate with the state government to harmonise the rural development projects in the area.