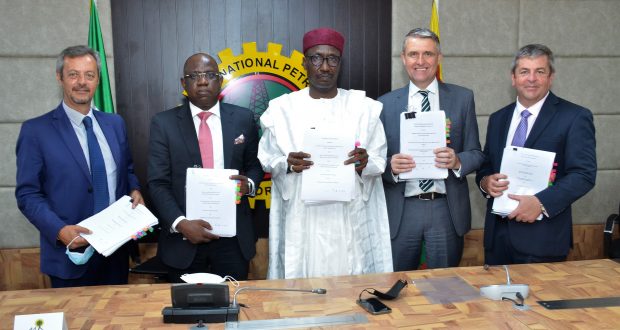 …Deal to Yield Over $780million in Immediate Revenues to Government
The Nigerian National Petroleum Corporation (NNPC) and its Production Sharing Contract (PSC) partners – Shell Nigeria Exploration and Production Company (SNEPCo), Total Exploration and Production Nigeria Limited (TEPNG), Esso Exploration and Production Nigeria Limited (EEPNL) and Nigerian Agip Exploration (NAE) – have executed agreements to renew Oil Mining Lease (OML) 118 for another 20 years.
The five agreements signed include, Dispute Settlement Agreement, Settlement Agreement, Historical Gas Agreement, Escrow Agreement and Renewed PSC Agreement.
A statement by the Group General Manager, Group Public Affairs Division of the NNPC, Dr. Kennie Obateru, quoted the Group Managing Director of the Corporation, Mallam Mele Kyari, as saying that over $10bn of investment would be unlocked as a result of the agreements which signaled the end of the long-standing disputes over the interpretation of the fiscal terms of the Production Sharing Contracts (PSC) and the emplacement of a clear and fair framework for the development of the huge deep-water assets in Nigeria.
According to him, this is an indication of “a renewed confidence between NNPC and her partners; between the Government and the investing communities which include NNPC. It produces value for all of us by providing a clear line of sight for investment in the Bonga bloc of around $10billion,” Mallam Kyari stated.
He disclosed that the deal would yield over $780million in immediate revenues to the Federal Government while it would also free the parties from over $9billion in contingent liabilities.
“Ultimately, these agreements will engender growth in our country where investment will come in for other assets, not just in the deep-water, but even for new investors. It is an opportunity for them to see that this country is ready for business,” the GMD enthused.
He thanked President Muhammadu Buhari, the Minister of State for Petroleum Resources, Chief Timpre Sylva, and the NNPC Board of Directors for enabling the Corporation to achieve this laudable landmark.
Also speaking at the event, the Country Chair of Shell Companies in Nigeria, Mr. Osagie Osunbor, said the OML 118 renewal agreement would remain a watershed in the history of deep-water investments in Nigeria, assuring that the giant stride would further bolster investor confidence in the country.
Speaking in a similar vein, the Managing Director of SNEPCo, Mr. Bayo Ojulari, noted that the agreements marked the end of a twelve-year dispute that had marred business relationship and affected trust and investment.
“Today, we have signed agreements that define the future of deep-water for Nigeria. This is the first deep-water block that was developed in Nigeria and it is also the first one that we are resolving all the disputes that will lay the foundation for the resolution of other PSCs,” the SNEPCo helmsman stated.
On their parts, the Managing Directors of Total, Mike Sangster, Exxonmobil, Richard Laing and NAOC, Roberto Danielle, all applauded the GMD NNPC, Mallam Kyari, for providing leadership which engendered the resolution of the disputes, assuring that the agreements would attract more investments into the Nigerian Oil and Gas Industry.