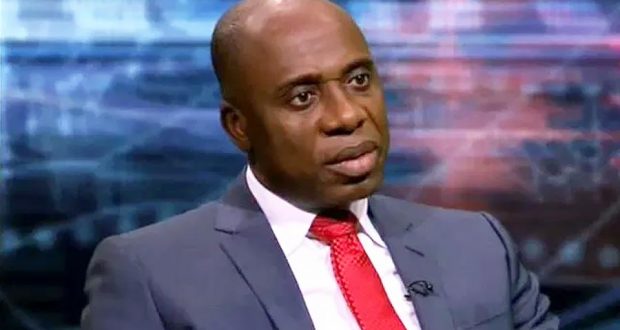 The Minister of Transportation, Rotimi Amaechi, said on Monday that President Muhammadu Buhari would inaugurate the Maritime Security Project in Lagos in June.

Amaechi made the disclosure when he received the Belgium Ambassador to Nigeria who paid him a courtesy visit in his office in Abuja.

He said that insecurity in the maritime sector which was now more complex than the world knew had become a concern to government.

”The Federal Government has come up with a solution and it is ready to take off. The Navy, Police, Army and State Security Service are involved.”

“Between 65 and 75 per cent of crimes come from our water and if we are able to eliminate them we will be making a lot of progress,” he said.

Amechi said the move was in line with the efforts of government to curb increasing criminal activities in the maritime sector.

He listed the crimes as piracy, sea robbery, kidnapping, oil theft, illegal bunkering, smuggling and illegal trafficking in drugs and persons within the Gulf of Guinea, especially Nigeria.

He, however, said that if the project was successful there would be improvement in maritime security in the near future and other countries in the Gulf of Guinea could adopt it.

Amaechi further said that the ministry would be glad to partner and share information with anyone who wanted it for the purpose of securing the gulf.

Earlier, the Belgium Ambassador to Nigeria, Daniel Bertrand, presented a letter to the minister, requesting Nigeria’s support to the Belgium candidate for a position at the International Maritime Organisation.

Bertrand also said that Belgium had keenly observed what was happening in the Gulf of Guinea and would like to be of assistance.

He said the country was ready to give support to the implementation of the maritime security in the gulf.

Share about us
2021-05-19
admin
Previous: Eko DisCo Embarks on Capital Projects for Improved Service Delivery
Next: Another Review of Electricity Tarrif May Trigger Further Inflation – Experts