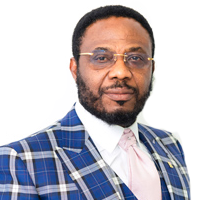 The anti-graft agency’s red ink embarrassingly proclaiming that the property was under investigation is glaringly seing on the residence.

As of press time, it was unclear whether Azudialu and his family would be able to enter the house.

This comes at a time when inhabitants of the quiet and elite neighborhood, as well as Lagosians who are aware of high-society events, believed that what happened to Festus Fadeyi, the head of Pan Ocean Corporation, an indigenous independent oil and gas business, would not repeat again.

Last year, the Assets Management Corporation of Nigeria, or AMCON, took Fadeyi’s opulent property, which had served as his family’s home for decades on the same street. Fadeyi’s Pan Ocean Corporation and its subsidiaries were taken over by the federal government agency due to bank loans totaling roughly N240 billion.

Nestoil’s Azudialu will now take the stage. High-profile residents of Ikoyi have been left stunned, as he was thought to be a decent businessman despite his wild lifestyle.

Although the reasons for the EFCC’s move are unclear, it is possible that he is being investigated for financial offenses. He had a rocky relationship with the GTBank, which alone financed his Nestoil Towers on Victoria Island’s Akin Adesola and Saka Tinubu Streets.

The charge at the time was that he failed to service the facility he used to construct the towers.

Ernest developed a taste for expensive luxury as income flowed into his accounts, and he became known for his fixation with planes and his predilection for purchasing private jets and high-end automobiles

Share about us
2021-05-17
admin
Previous: Subsidy : Cancer that Need Quick Economic Surgery
Next: PENGASSAN : Insecurity in PH Zone will Hurt the Nation