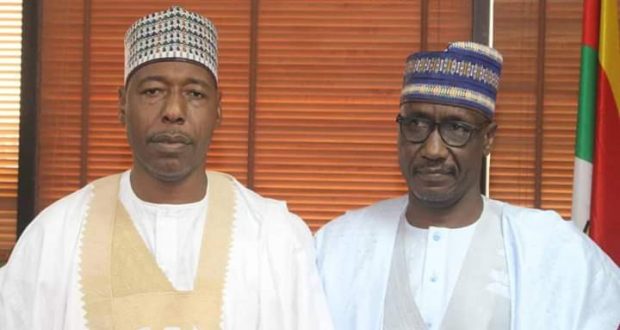 The Group Managing Director (GMD), Nigeria National Petroleum Corporation (NNPC), Mele Kyari, said the completion of a gas-powered electricity facility in Borno to serve as an alternative to the incessant vandalism of on-grid facilities by insurgents will be in four months.

Kyari made this assertion during a visit to the Governor Babagana Umara Zulum of Borno State recently. He added that the federal government was concerned about the discomfort brought about by the lack of electricity in Maiduguri and environs arising from incessant attacks of Boko Haram.

The Head of Gas and Power, Yusuf Usman and representatives of Greensville Liquefied Natural Gas (LNG), a company that delivers gas to power plants and industries across the country including officials from the Distribution Companies (Discos) accompanied the GMD.

According to the GMD, “Our essence of coming to Maiduguri is to join you to resolve the power problem in Borno, particularly Maiduguri metropolis and its environs in the next four months.”

He stated further that it was President Muhammadu Buhari’s intention to deepen gas power consumption in the country, particularly in the domestic market.

The GMD noted that the easiest way to do it was to deliver gas to power and ultimately to industries.

“We have seen the opportunities and the challenges faced by the people in this part of the country, and it is pertinent to support your people have light restored back to this city,” he said.

He noted that the dedicated power plant in Maiduguri would serve the current need of power supply not only in Maiduguri but to other parts of the neighbouring cities, saying that the NNPC was going to focus on the short term to see that within three to four months power is restored power back to the city.

Responding, Zulum said Borno State has received tremendous support from the corporation, especially with the performing of a groundbreaking ceremony for the construction of the 200-bed capacity Infectious Diseases Hospital in Maiduguri, in addition to the ongoing construction of the Medical Diagnosis Centre.

“Power is very essential. With power, we can reduce the magnitude of the insurgency, because millions of people are earning their means of livelihoods through the use of power.

“I have seen the agony our people went through during the nationwide fuel crisis, where entrepreneurs, especially market women and youths were trooping into filling stations queuing to buy some litres of petrol for their domestic or business usage.

“The ongoing insurgency has cut off the entire Borno from the national grid in the last two or three months. We put in all our efforts and restored it, we saw the joy and jubilation the people of Borno demonstrated after the restoration. But unfortunately, after 48 hours, the same group of insurgents went back and destroyed the main tower again.

“We have no other alternative than to source for other solutions, instead of relying on the gridlines, as it is very difficult to man the poles. That informed our decision to contact NNPC and other power stakeholders to come to our aid, and I am very glad to have you here for this purpose,” Zulum said.

Executive Chairman, Borno State Rural Electrification Board, Abdulsalam Mohammed, in his comments, noted that the gas power plant when established will not only supply power to Maiduguri but to other rural communities who need it for agricultural purposes.

It is hoped that the gas power plant will bring life back to the state that has been ravaged by insurgency. Recently, a major power plant was bombed by the insurgents causing harm to communities and rural areas across the state.