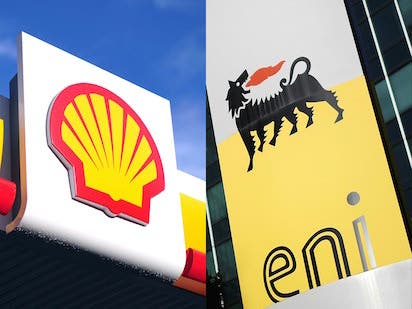 ………… by Jenifer Dike………..
There are strong indications that Shell and Eni may face another trial in Nigeria even after the Milian court in Italy had settled the case against them over OPL 245. Human and Evironmental activists are pushing that another court trials in Nigeria be open against the two multinational oil companies.

The activits have written that President Muhammadu Buhari should prosecute the two oil Giants in Nigeria. Shell and Eni have been dragged to court in Milan, Italy over horrendous alleged cases of corruption in relation to the Oil Prospecting Lease (OPL) 245

The country’s foremost anti-corruption group, Human and Environmental Development Agenda, (HEDA Resource Centre) in a letter sent to Buhari urged the Nigerian authorities to ignore public statements by the oil company, ENI, that the trial in Italy should substitute for and annul any other possible legal action in Nigeria.

In the letter addressed to the President, HEDA’s Chairman, Mr. Olanrewaju Suraju said the trial in Milan, Italy should not foreclose the oil giants facing charges of breach of Nigerian laws where applicable.

Suraju said Eni and Shell were not in a position to determine if they should be tried in Nigeria or not.

Eni had said in a recent statement that it should not be prosecuted in Nigeria for alleged corruption in the OPL 245 deal because Nigeria “had specifically chosen the court in Milan, as the qualified and entitled venue” to bring the case against the company.

Eni also argued that a “new” trial of Eni in Nigeria would be unjustified.

But HEDA said “Nigeria is not a satellite country of Italy. Eni’s request is arrant nonsense. Nigeria had no say in the Milan prosecutor’s decision to prosecute Eni, Shell and others. This was a choice solely for the Italian authorities. It was only once the trial had started that Nigeria was able to intervene as a civil party. As Eni knows full well, a civil party is not the same as a prosecutor.”

HEDA said “Mr President, this is a shameful manipulation of the facts. The case against Eni in Nigeria is already being heard: it is not a “new” case. Eni, as a defendant, must know this. Why then is the company seeking to pull the wool over the eyes of the Nigerian public?”

The anti-corruption group said further that the Nigerian case is being tried under Nigerian law, which, in line with English law, has entirely different rules of evidence to those in Italy.

“It is entirely proper that Nigeria, as a sovereign country, should try offences committed in Nigeria under its own laws. Nigeria is not a colony of Italy and it would be wholly repugnant for Nigeria to outsource its justice system to another country whose laws and court procedures differ radically. Eni is entirely silent on this issue,” HEDA said

Suraju noted that the trial in Nigeria has some different defendants (including the companies, which are subsidiaries of Eni SPA not Eni SPA itself) and no principle of double-jeopardy applies under judicial cooperation agreements between Italy and Nigeria.

Eni, HEDA insisted, attempted to discredit reports that it sought improperly to interfere in Milan trial, adding that it is certainly true that the main source of the allegations, Piero Amara, is a convicted criminal but that his conviction was, among others, for his part in a scheme orchestrated by Eni to derail the OPL 245 prosecution in Milan.

“If anyone has knowledge of the details of that scheme, it is likely to be Amara. His testimony should therefore be taken seriously, even if denied by Eni. Indeed, a joint statement issued on the 30 March 2021 by the Chief Prosecutor and Chief Judge of the Milan Tribunal confirms that ‘interference’ in the OPL 245 trial has been ascertained”