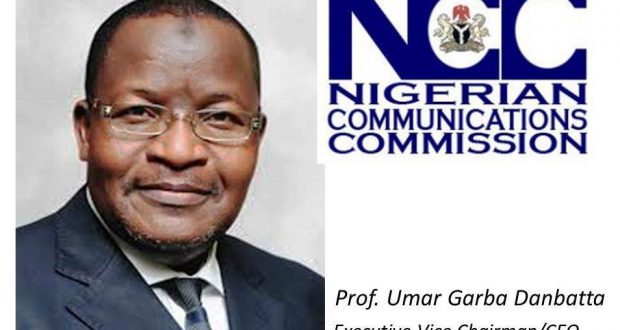 …….by Ben Ndubuwa……
The Executive Vice Chairman (EVC) of the Nigerian Communications Commission (NCC), Professor Umar Danbatta, has expressed delight that the number of active telephone lines being used by Nigerians has significantly increased from about 400,000 in 2001 to over 204 million as of December 2021 and this has made it possible for financial institutions and mobile money operators licensed by the Central Bank of Nigerian to leverage this large number of mobile subscriptions to provide financial transactions to Nigerians.

Danbatta said that telecommunication services and infrastructure has become more accessible in the country. According to him banks has identified the Unstructured Supplementary Data Services ( USSD) channel as a cost-efficient way of delivering financial services to their customers.

“The banks subsequently applied for and we’re granted USSD short codes by the Commission to deliver financial services to Nigerians” he said.

Furthermore the NCC boss revealed that the nation, in no distant time will become a Network Society, given its achievements in ensuring an all inclusive digital and broadband drive in its financial systems.

Danbatta explained this as a guest speaker at a one-day Bullion Lecture with the theme,” Driving Pervasive Broadband Penetration to Deepen Digital Financial Inclusion for Nigeria’s Social and Economic Transformation,” organised by Centre for Financial Journalism.

He said that the NCC in a move to achieve the goal of Pervasive Broadband Drive and Financial Inclusion, has actively involved itself in actuating the government’s financial inclusion target of. 20 percent exclusion by the year 2020.

As a result he pointed out that the NCC has embarked on various regulatory initiatives that have continued to increase access to telephone lines and improve access to high-speed internet or broadband.

” Foremost among these regulatory initiatives is the implementation of Open
Access Model for infrastructure deployment through the competitively selected Infrastructure Companies(InfraCos) called InfraCo Projects.”

“The InfraCo initiative is expected to provide, at a minimum, broadband fibre anɗ connectivity to every Local Government Areas(LGAs), of the Federation, totalling 774 fibre Points of Access (PoAs) with a minimum speed of 10Gbps which will translate to, at least, 38,296km of Optic Fibre Cable(OFC) to the transmission over the next year’s,” he said.

Professor Danbatta, who further informed that the Commission has licensed six of seven InfraCos to implement this project, added, that it is intended that the presence of fibre points of access in each LGA will not only bring about developments,lower cost of entry for telephone companies as well as bring about innovative services and applications, but also, improve the condition of living in the rural, urban and semi-urban areas, especially with regards to access to financial services.

He said that the InfraCo project can be seen as the beginning of the ” Next Level”
Journey towards achieving the 120,000km target of fibre connectivity set by the current administration of President Buhari.

The EVC, also informed, that the NCC has begun a review process of the InfraCo framework as well as its funding options in order to ensure effective implementation of the national fibre project.

“When fully implemented, it will ensure robust and pervasive broadband infrastructure to drive availability, accessibility and affordability in financial services.”

“The NCC also provided the requisite infrastructure, connectivity and capacity to interconnect four internet Exchange Points (IXPs) in Lagos, Enugu, Port Harcourt and Kano in order to localise some of the internet traffic in Nigeria and encourage the creation, hosting and interchange of data within Nigeria.”

Speaking on the possibility of realising the promises of wireless infrastructure for rapid advancement and ubiquitous coverage, which can assist financial inclusion, among a host of other services, the NCC boss, further informed, that the Commission has put in place a number of guidelines and regulatory measures in order to ensure availability and sustainability of the wireless technologies.

These, he said include; the development of Spectrum Trading Guidelines to enable operators in possession of un-utilised or under-utilised frequency spectrum to trade such limited assets in the market place, thereby freeing resources as well as eliminating spectrum hoarding; Ongoing efforts to leverage the television white space(TVWS),to extend affordable broadband services to Nigerians in digitally excluded areas and Effective and proper utilisation of available wireless spectrum frequency resources for widespread service deployment to Nigerians.

Others are: Trial of Fifth Generation (5G) network in Nigeria, preparatory to its commercial deployment to improve digital services experienced by Nigerians; Development of guidelines for commercial satellite deployment which has seen the registration of major satellite providers in the country; Development of framework for National Roaming Service, been currently triad on some networks and the ongoing development of licensing framework for mobile virtual network operators (MVNOs), that will ride on and buy capacity from incumbent mobile network operators to provide telecoms services to unserved, under-served and rural communities in the country.

Professor Danbatta, further revealed that the NCC, through the Universal Service Provision Fund(USPF), has been stimulating the adoption of ICT in various areas of the country in order to facilitate connectivity and access through building strong infrastructures as well as promoting sustainable industrial growth in the nation.
“Some of the projects undertaken in this regard are Tertiary Institutions Knowledge Centre,(TIKC), School Knowledge Centre (SKC), Base Transceiver Station (BTD), Backbone Transmission Infrastructure (BTRAIN) project, University Inter-Campus Connectivity (UnICC), E-Accessibility or ICT for challenged groups/ persons living with disabilities (PWD), among others.”

” I am happy to inform you that, through all the aforementioned initiatives, broadband penetration in Nigeria has been on the upward trajectory , rising to 45 percent as of December 2020.”

” Penetration was far below 10 percent when I assumed office in 2015. The Commission is therefore poised to further accelerate this growth as it works with the Ministry of Communications and Digital Economy to support the Federal Government’s National Digital Policy and Strategy (NDEPS), drive the Nigerian National Broadband Plan (NNBP) 2000-2025 targets of 70 percent broadband penetration, towards boosting digital access across the nooks and crannies of the country,” he stressed.

Share about us
2021-03-12
admin
Previous: Signature Bonus: DPR May Weed Out Firms with Weak Financial Muscles After 45 Days Notice
Next: PPPRA Says No Increase in Pump Price of of Petrol