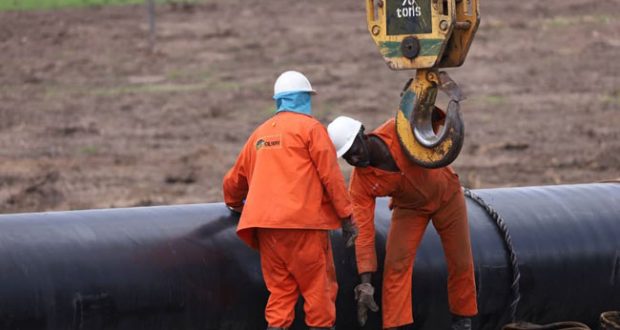 The House of Representatives has grilled the Nigeria National Petroleum Corporation (NNPC) and Brentex CPP a company alleged to belong to Chinese government using Nigerians as fronts. The $2.6 billion AKK project is suppose to be carried out under the local content law which Brentex CCP may have allegedly breached.

The House of Representatives has begun investigation of the alleged breach of Nigeria’s laws on local content in the execution of the Federal Government project to construct a gas pipeline from Ajaokuta to Kano.

The House Committee on Local Content, grilled some of the parties in the construction contract in Abuja particularly probing the contractors handling the 40’’× 318.6km BVS12 Kaduna-Kano section or Segment 2 of the Ajaokuta-Kaduna-Kano.

The Local Content Advocacy and Management Group had petitioned the House, alleging that contractors in the consortium that bid for the project had been swapped after the Federal Executive Council approved the contract.

The petition, dated February 2, 2021, was addressed to Speaker of the House, Femi Gbajabiamila, and copied to committee’s Chairman, Legor Idagbo.

It read in part, “We call on you to use your honorable position to please investigate and address the compliance, level of participation and engagement by Brentex CPP (Consortium) of our verified local companies who have the technical capacity to construct pipelines as required in this project.

“Surprisingly, upon contract award, Brentex CPP in clear violation of the pre-qualification bid, went ahead to engage companies from China to carry out these engineering service statutorily reserved for our local companies, for which these local engineering companies have been prequalified by NNPC and ratified by BPP.”

The Lead Consultant and Solicitor for LCAMG, John Lebor, who spoke to journalists after the hearing, alleged that the contractors had violated the local content law, the NNPC Act, Nigerian export regulation, among others.

Earlier, the committee grilled Chief Operating Officer, Gas and Power, Yusuf Usman, who represented the Group Managing Director of the NNPC, Melee Kyari, who said the corporation only signed a deal with Brentex CPP, while Bablinks was not involved in the deal.

Usman stated that it was the consortium that later brought in Bablink Resource Limited, adding that all the terms of the contract had complied with the Local Content Act.

He stressed that the NNPC had ensured compliance with all laws in relation to the construction project.

He admitted that it was in partnership with Bablinks and not that Bablinks was part of the consortium.

The committee resolved to summon the Bureau of Public Procurement, while asking the NNPC, Brentex CPP and Bablinks to bring all documents relating to the contracts as well as all agreements between parties involved within one week for further legislative action.

The committee also directed the clerk to write to Corporate Affairs Commission to provide forward details of owners of the companies involved in the project.