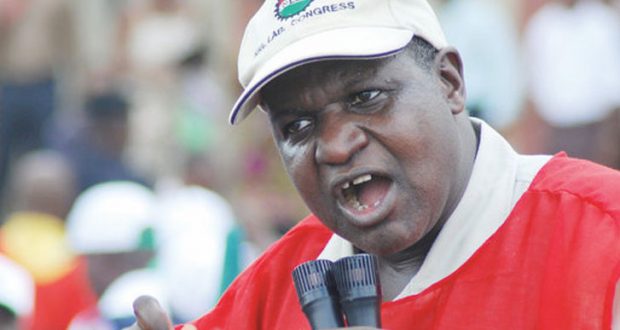 …………by Abisoye Shola……….
The organised labour has kicked against deregulation that is import oriented but insisting that the Refineries must be fixed so that the price of petroleum products will be based on production cost at the Refineries not on the price of crude in the international market.
The president of the Nigerian Labour Congress (NLC) Mr Ayuba Wabba explained that other OPEC countries uses production cost to determine the pump price of their Petroleum products instead of the price of crude in the international market.
On the outcome of the technical committee meeting chaired by the Minister of Labour Dr. Chris Ngige organised labour said that the issue of determining the real pump price of petrol is still on-going.

Wabba posited that the Nigerian National Petroleum Corporation, (NNPC), “should do everything possible to make sure the current template serves Nigerians instead of the market forces.”

Collaborating this the vice president of NLC, Mr. Amaechi Asugwuni said that NNPC should continue to find the differential between the current pump price of N62 per litter and the current landing cost of PMS until the Refineries are working.

Asugwuni wondered why up till now the Refineries are yet to be fixed since the present administration promised to fix the Refineries before the year 2019. According to him, labour will not support deregulation that is based on import of petroleum products.

He pointed out that by fixing Refineries jobs will be created and moreso, the price of PMS will be based on production cost. On whether government insist on hicking the price of petrol, Asugwuni, who was speaking on Channel Tv :’sunrise’ said that the issue is now beyond labour and that only Nigerians who have been bearing the burden of electricity increase and that of petrol will decide. Adding that labour will not hesitate to resist any price hick on petrol.

But experts have kicked against organised labour resistance to the inevitable increase in the pump price of petrol. They said that there is no where in West Africa where the price of Petrol is less than 200 Naira per litre. For instance It is almost 350 Naira per litre in Ghana at current exchange.

Prof. Wumi IIledare, a Professor of petroleum economics told our correspondent that the labor unions are living in the memory of the past and compromising a sustainable future in the process.

According to industry stakeholders the organised labour’s hardline posture of giving conditions to support any increase in the pump price of petrol is not acceptable. It is said that labour Unions are insisting the government should fix the Refineries and make available forex to marketers at affordable rates.

But experts are saying that labour Union should be more concern on the provisions of infrastructural facilities that will benefit majority of Nigerians.
Mr. Edward Dimeji, an Executive Director of Hyde Petroleum limited, a leading independent petroleum marketer explained to Financial Energy Review that labour Unions have consistently over the decades keeps asking for the wrong things . “How has low fuel price ever helped the overall well being of the average Nigerian

“Labor should have asked for better schools, hospitals among others. If there are better schools the chances of lifting people out of poverty would have been much higher. Instead they encouraged government to squander trillions of naira in so called subsidies and we are still in the same spot 22 years later” he said..
.

Prof. Iledare wondered why labour should be asking the government to subisidize forex and petrol at the same time. Adding that asking the government for both is to commit suicide. “It is better to let the unions go on strike than do those two things. Why are the unions not complaining about DSTV and telecom. I hate to say we told them in 2016 not to set the pump price at 140 Naira. They did not listen” he said.