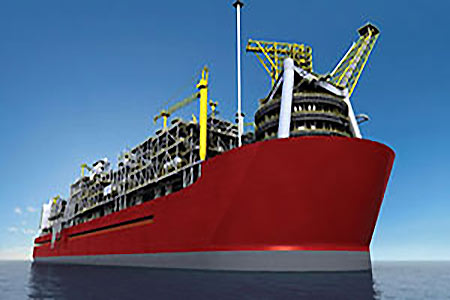 The restart of the huge Prelude facility — which at 488 metres is longer than four football fields — is a welcome boost for Shell as it coincides with a record surge in LNG prices fuelled by a cold snap in Asia.

But construction challenges, cost overruns and technical problems with Prelude, as well as challenging market conditions, have prompted Shell and other producers to cancel other FLNG projects.

“Prelude has been a ‘white elephant’ — we always felt it was a technology looking for a solution rather than the other way round,” said Neil Beveridge, an analyst at Bernstein.

He said there were a large number of competing onshore LNG projects aiming to come to market that did not require the expensive, pioneering technology necessary for Prelude. As a result very few large-scale FLNG projects were going ahead, added Mr Beveridge.

Prelude was intended to be a flagship project for FLNG. The floating facilities liquefy gas from remote offshore fields without the need for onshore facilities to turn it into LNG, a vital fuel for energy-hungry markets in Asia. Gas is pumped from below the seabed to the floating platform, where it is cooled to turn it into liquid for onward transport.

But the exercise has turned out to be costly for Shell and its partners: Japan’s Inpex (which has a 17.5 per cent stake), Korea’s Kogas (10 per cent) and Taiwan’s OPIC (5 per cent).

Shell has not revealed the cost of Prelude but analysts estimate the price tag has ballooned to as much as A$17bn ($13bn). The Anglo-Dutch company reported $9bn in impairment charges on its Australian gas assets in the second and third quarters of 2020.

“LNG cargoes have resumed from Shell’s Prelude FLNG facility. Prelude is a multi-decade project, and our focus remains on delivering sustained performance over the long-term,” Shell said.

Prelude began shipping gas in June 2019 but was forced to shut down in February last year due to problems with its diesel generators.

The remote location of the facility — 475km off Australia’s west coast — and its technical complexity, compounded by Covid-19 restrictions, have added to Shell’s challenges in restarting operations, said analysts.

Saul Kavonic, an analyst at Credit Suisse, said industry ambitions for FLNG to be the next big LNG trend had been hit hard.

Shell decided not to proceed with orders for three FLNG facilities from Samsung following a decision in 2016 by Woodside to cancel its plans to jointly develop a Western Australian gasfield using the technology. Also in 2016, FLNG projects backed by Canada’s AltaGas and Belgium’s Exmar in Canada and Colombia were scrapped due to poor market conditions.

“The industry FLNG ambition to ‘design one build many’ has unfortunately become ‘design many build one’ in some quarters following disappointing project execution,” said Mr Kavonic. “Only more modest niche applications are now seen as plausible