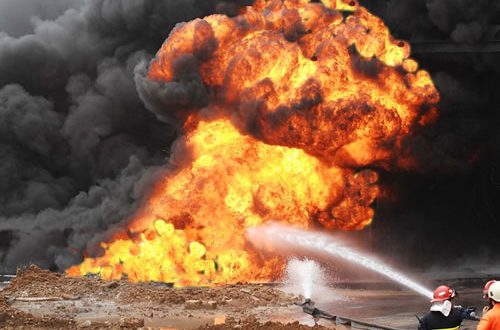 Nigeria Liquified Natural Gas (NLNG) limited and Nigeria Ship Oil Company (NAOC) Pipelines explosion have rocked Oduoha community in Emohua Local Government Area of Rivers State leaving the community in shock for two days. The pipelines are the one that supply gas through the community to a terminal in Bonny Island, in Rivers which belong to Nigeria Liquefied Natural Gas (NLNG) and Nigeria Agip Oil Company (NAOC).

The two separate gas pipes operated by NLNG and NAOC, ran on the same line where the incident occurred, making it difficult to ascertain who owns which pipeline.

It was further learnt that as at 12 p.m., the vibration and leakage from the gas pipeline was still raging, as residents of the community ran for safety.

The Paramount Ruler of Oduoha, HRH Chief Ferdinand Ogbuehi, said “since the incident happened by people have been living in fear. The vibration from the explosion sent many residents relocating.

“We are not at rest at all, and have not seen this type of thing before. We want the government to come and see what is happening.

“We have announced to the people that nobody should go there (the scene of the explosion). We want the government to come, because we are afraid of going closer to the place,” Ogbuehi said.

Also commenting, the Chairman of Oduoha Community Development Committee (CDC), Mr Napoleon Ewule, said the community had already contacted both NLNG and NAOC, and they had promised to visit the scene to determine whose facility was affected.

The CDC chairman said the explosion, which occurred in the early hours of Wednesday, shook the community with many thinking that an aeroplane had crashed in the community.

“So, after I heard the explosion, I immediately called and mobilised youths of Oduoha to see what had happened. Later, when we discovered what had happened, we came back and informed our people to avoid the area.

“There are two pipelines running on the same line that belongs to NAOC and NLNG. We will know who owns the exploded pipeline when both companies come for inspection,” he said.

Ewule pleaded with the government to come in and stop the leakage, saying that the gas emitted from the damaged pipeline was endangering the lives and livelihoods of residents.

Officials of NLNG and NOAC were not immediately available for comment as at the time of filing this report.