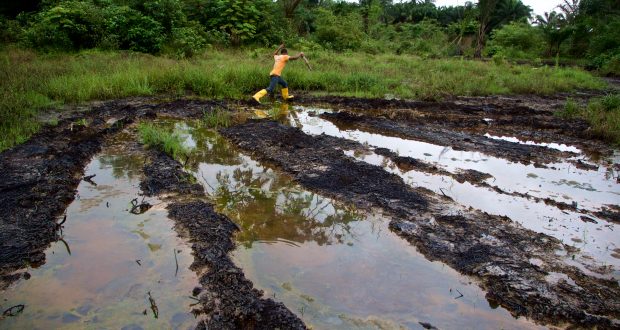 The Artisan Fishermen Association of Nigeria has called on the Federal Government to prevail on Shell Nigeria Exploration and Production Company to pay the $3.6bn fine imposed on it by an industry regulator over the 2011 Bonga oilfield spill incident.

In a related development, the Environmental Rights Action/Friends of the Earth Nigeria has raised the alarm that Conoil Plc has yet to respond to an oil spill from its facility around Akassa Kingdom environment in the Brass Local Government Area of Bayelsa State, four months after the incident.

The Coordinator, ARFAN, Niger Delta chapter, Samuel Ayadi, who made the call in an interview in Yenagoa, Bayelsa State, on Friday, said fishermen had suffered untold hardship fishing at the nation’s territorial waters since 2011 when an equipment failure from the Bonga offshore field operated by SNEPCo discharged some 40,000 barrels of crude into the waters.

On December 20, 2011, during loading of crude at Bonga fields within Oil Mining Lease 118 situated at 120 kilometres off the Atlantic coastline, the export line ruptured and discharged crude oil into the sea.

The export line, according to a Joint Investigation Report by the National Oil Spill Detection and Response Agency and SNEPCo, spewed about 40,000 barrels (6.4 million litres) of crude oil into the sea.

Ayadi said, “We are further appealing to the Federal Government to prevail on Shell to obey the courts and pay a $3.6bn imposed by regulators for the Bonga spill incident. The compensation will help fishermen thrown out of business to recover.”

The ARFAN leader noted that having complied with NOSDRA’s order to pull out of fishing to avoid catching contaminated fish that could compromise public health, the fishermen deserved to be indemnified for the loss of income whilst the clean-up lasted.

The fine comprised a $1.8bn as compensation for the damages done to natural resources and consequential loss of income by the affected shoreline communities as well as punitive damage of $1.8bn.

Following a legal action instituted by Shell at a Federal High Court in Lagos, the trial judge, Justice Mojisola Olatoregun, on June 20, 2018, dismissed the suit challenging the imposition of $3.6bn fine on it by the regulatory agency.

It claimed that the leakage had not been stopped and spilled crude was still spreading around Akassa communities on the fringes of the Atlantic Ocean.

The report quoted the Chairman, United Fishing Union of Sangana, Ikonikumo Noel, as lamenting that the spill had destroyed a huge number of fishes and other aquatic lives that were washed ashore the shoreline of Akassa communities.