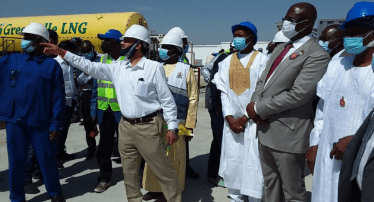 Designed to enhance gas and power supply to industries in the state,the LNG regasified facilities were erected by the Greenville LNG Company at Mamuda Agro and Allied Products Nigeria Ltd and ASPIRA Nigeria Ltd.

Sylva, during the inauguration of the facilities, told Journalists that the Federal Government had initiated viable projects to accelerate development of LNG and promote effective utilisation of gas resources.

According to him, this is to address energy crisis, create employment and encourage industrial development in the country.

He said that 10 additional similar LNG plants would be established to boost power supply to industries and people in Kano State.

Sylva said:“It is the success of our programme in action; we have declared this year as the year of gas and on December 1, the President has rolled out the auto gas project and we are here to see that programme is in action.

“This factory is now expanding because of the cheaper and cleaner energy that they are getting and it would employ 5,000 youths.

“And it would enable the establishment of various factories creating lots of employment opportunities in Kano State.
“We are also expecting a lot of power generation from gas which is cheaper for the people in Kano State.

“Already, ASPIRA is generating four megawatts for themselves, which means four megawatts out of the grid that would be saved for ordinary people in the state.

“The other factory generates six megawatts that translates to 10 megawatts of the off the grid and it will be saved for use for the ordinary people.

“It is a revolutionary programme that is going to change Nigeria in the cause of time.”

According to him, over five million jobs will be created through the utilisation of the LNG gas plants to be established across the country.

The minister reiterated government’s commitment to supporting effective utilisation of natural gas to address power and industrial needs in the country.

In his remarks, Mr Hassan Mamuda, the Chief Executive Officer, Mamuda Agro, commended the gesture, saying it would boost power supply and productivity.

Hassan said the Greenville company had installed a cryogenic storage tank with capacity of 110M in the factory.

He said with the installation of the facility, the company was currently generating six megawatts for its use, adding that it would generate 26 megawatts when fully operational.

The manager lauded the LNG initiative, saying, ”we have not seen anything like this before this administration, it will herald industrial development in the country.”

On his part, Alhaji Haruna Zago, the Manager, ASIPRA Nigeria Ltd., said the company was currently generating four megawatts which enabled it to expand its operations.

Zago said the company would increase its power generation to 10 megawatts through utilisation of the LNG facilities, to boost power supply to other industries in the state.

Greenville is the pioneer company that supplies natural gas to industrial customers in northern Nigeria.

According to its fact sheet, Greenville has fleet of cryogenic tankers known as “Virtual Pipeline” supplying LNG to far reaching areas and remote locations in the country.

The company operates a gas processing plant at Rumuji, Rivers State and three liquefaction trains with a total daily production capacity of 2,250MT under phase 1nan