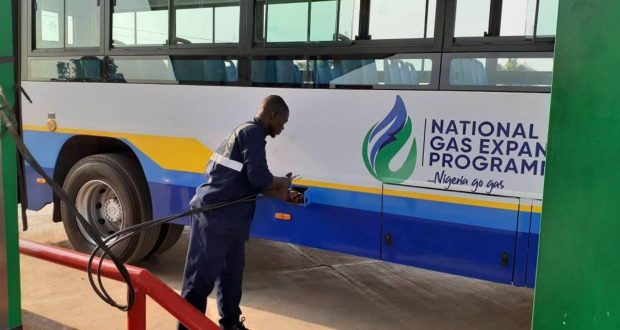 The scheme billed to be launched tomorrow Tuesday, December 1 by President Mohammadu Buhari is expected to encourage a massive change from liquid fuel such as Premium Motor Spirit (PMS) otherwise know as petrol and AGO known as diesel to autogas.

Over the weekend in Lagos the Autogas and Natural Gas Vehicles Committee (ANGV) of the National Gas Expansion Programme (NGEP) in a sensitization and stakeholders programme title “The Catalyst for Nigeria’s Economic Renaissance” said that there are indications that major oil Marketers are kicking against the autogas project because some of their facilities such as the Tankfarms are built on bank credit facilities and only meant for liquid fuel and as result will be a big challenge to change over to gas facilities.

However, the Chairman of MOMAN, Mr.Tunji Oyebanji told Financial Energy Review that they are not aware of such push back.”I am not aware of any such push back. Gas is the future, anyone that doesn’t embrace it will get left behind. Having said that, government should support gas expansion with adequate financial incentives to encourage investment in the sector particularly from those who maybe under pressure from the banks” he said.

Collaborating the readiness of the Marketers to support the gas expansion programme, the Executive Secretary of DAPPMAN, Mr. Olufemi Adewole said his Association has been on the forefront of the aotogas scheme right from the beginning and has been doing everything possible to ensure that the programme become a success. According to him the gas business is far more profitable than even the liquid fuel ” How then can one discard such business and not embrace it” he queried.

The Chairman, Dr. Mohammed Ibrahim, of ANGV in his presentation to the stakeholders encourages the Marketers particularly those whose facilities are built along the Apapa axis to quickly migrate to the autogas scheme. According to him the autogas scheme is the new technology that must be embraced

He explained that the scheme is also to encourage the use of autogas as it is cheaper an equivalent of N80 to the current N165 per litre of petrol. It will also reduce high reliance on petrol and achieve a cleaner environment.

According to him when the scheme fully takes off it will be difficult for successive government to reverse it given that the cost of liquid fuel would have sky- rocketed and the government can no longer afford to subsidize the liquid fuel. Furthermore, there are also strong indications that after the passage of the Petroleum Industry Bill (PIB) the price of petrol may increase between N300 to N400 per litre.