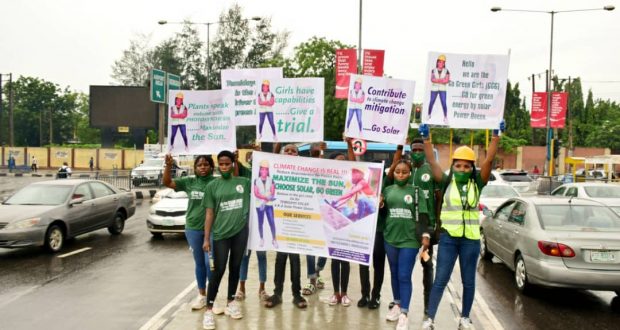 A leading advocate of cleaner environment, Temidayo Joshua, has launched a campaign in Lagos on renewable energy named ‘Go Green’. According to her, the campaign is aimed at creating awareness on the impact of Green House emissions on planet earth.

Temidayo Joshua, otherwise called Temidayo Solar Queen started her campaign by publishing articles urging Nigerians to replace dirty fuels with renewable energy.
Meanwhile, the solar queen has taken the campaign to the door steps of Lagosians informing them on the need to go green and support a girl child achieve her dream of cleaner environment.

The campaign which started in Maryland bus stop before it moved to Falomo and its environs on the Lagos Island during which she addressed journalists and expressed her gratitude to Lagosians for supporting the message “Go Green” Campaign.

On what inspired her to embark on the campaign, she stated that “it all began in my secondary years when I was given a topic on effects of green house emissions on planet earth. Through research, I discovered that rising green house emissions will lead to increase in global warming which may make the earth inhabitable for you and me.

“I couldn’t study sciences in the university for lack of finances but I had the opportunity to get trained in Solar Energy installation and today, I am not just an expert in Solar panel installation, but also an advocate of cleaner energy in Nigeria and the world” she said.

“As you may be aware, with the recent hike in electricity tariff, customers are now paying an average of N56/kwh and there is also the challenge of crazy billing whereby customers will pay for energy they didn’t consume.

“With Solar energy, you spend less than N30/kwh, you have total control of your energy consumption, you need not bother about crazy billing and most importantly, you are contributing to the promotion of cleaner and sustainable energy” she explained.

She however urged the federal government and Lagos State government to promote the GIRL CHILD in achieving her dream of cleaner environment.