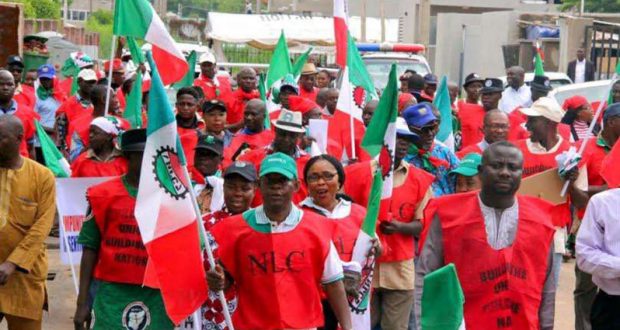 The planned strike by Organised Labour has been suspended as Federal government and labour Union have agreed to suspend the new electricity tariff however the new pump price of Premium Motor Spirit (PMS) known as petrol to remain.
The government has also agreed to Put in place some palliatives for Nigerians as committee to resolve areas of disagreement between labour and the government is to be set up.. The committee will include labour Union representative and government officials and to be headed by Minister of Labour, Chris Ngige.
The Nigeria Labour Congree (NLC), Trade Union Congress and some civil society had kicked against the the recent increase in pump price of Premium Motor Spirit (PMS) and electricity tariff.

However the government in a last minute move to forestall the planned strike by labour had invited labour representative to Ask Rock after the meeting between the leadership of the House of Representatives headed by the speaker, Femi Gbajabiamila had failed to assuage the labour Union to suspend the planned strike.
Prior to this last meeting between the organised labour and federal government representatives which include Secretary to the federal government, Boss Mustafa, Ngige and Minister of State for Petroleum Resources, Timipre Sylva, they had hinted that government is not going back to the era of subsidy.
Sylva said that the government do not have the resources to continue subsidy. According to him, the government had explained that to labour and labour is not insisting on government reversing the new price of petrol.
A representative of labour said that they are going into the meeting with open mind and cannot insist on strike if the government meet some the their request