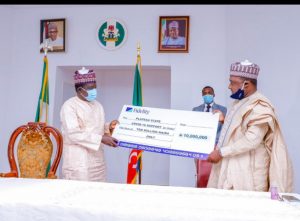 Fidelity Bank Plc on Wednesday donated N10 million to the Plateau govt COVID-19 Trust Fund.
The Regional Head, North Central, of the bank, Mr Sadi Zawuya, while making the presentation at Government House Jos, commended Gov Simon Lalong for his commitment in combating the disease in Plateau.
“We want to appreciate and commend the state governor for his efforts in the combat of COVID-19, and on behalf of the board and management of Fidelity, we donate the sum of N10 million.
“We previously made a donation of N250 million to the federal government and deem it fit to replicate similar gesture to Plateau,” he said.
Zawuya said the donation was to enable the state access what they need, especially palliatives and other commodities, in controlling the spread of the disease in Plateau.
Responding, the governor of Plateau, Mr Simon Lalong, appreciated the bank for the donation, saying real friends assist in times of need.
“I am happy with this development; when you have a problem and you see friends coming, you get relief of your challenge,” he said.
Lalong said it was his earnest prayer that all efforts to combat the disease would be successful, and life would return to normalcy.
The governor urged Nigerians to be hopeful of the end of the pandemic and adhere to preventive measures set by government at all levels to control the spread of the disease.
He also prayed to God to replenish the resources of the bank, as they had donated to the sustenance of humanity

Share about us
2020-05-21
admin
Previous: NCDMB and DPR Kick Against Abuse of Expatriate Quota
Next: Power Minister Meets New Management of TCN Over Completion of Projects