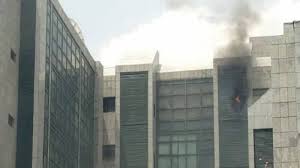 The headquarters of the Corporate Affairs Commission (CAC) in Abuja has gone up in flame. This is barely a week after the Accountant General of the Federation went up on smoke.
The building is located in the highbrow Maitama District of the territory, an area which plays host to several government buildings and other private concerns.
Although the cause of the fire was not immediately known, GREATRIBUNETVNEWS, Learned that the Federal Fire Service had been alerted to the incident.
When contacted, spokesperson of the Federal Fire Service, DSF Ugo Huan said fire fighters were on their way to the scene.