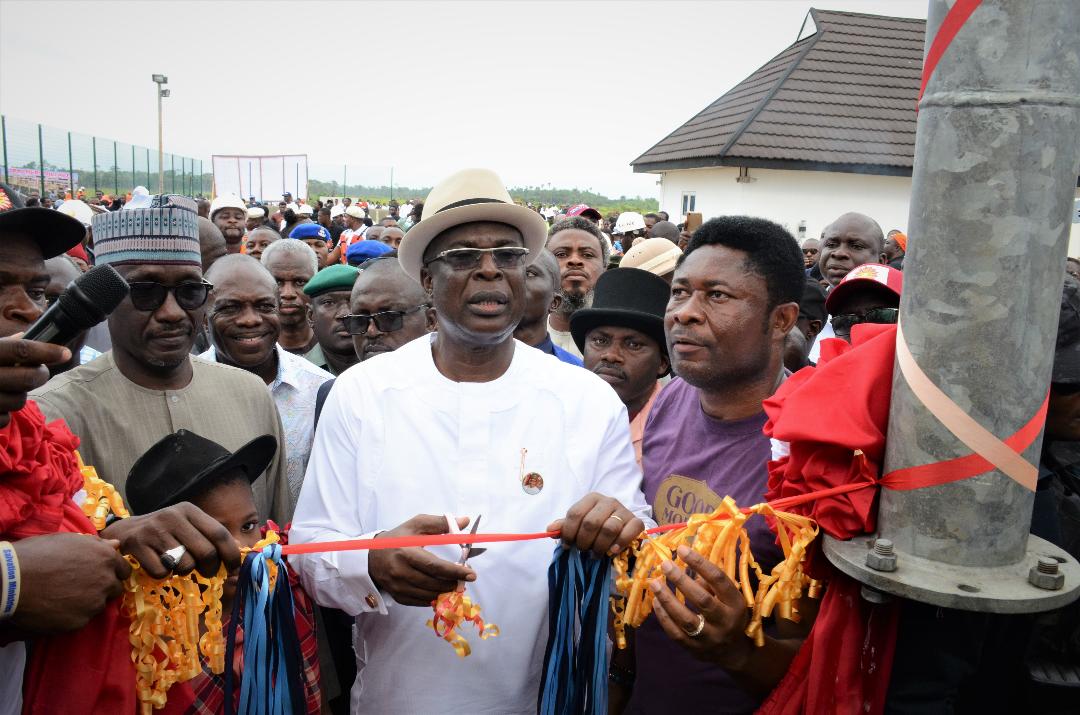 The Federal Government would leave no stone unturned in the efforts to bring about lasting peace and security in the nation’s oil producing host communities and the entire Niger Delta region.

The Minister of State for Petroleum Resources, Chief Timipre Sylva and the Group Managing Director of the Nigerian National Petroleum Corporation (NNPC), Mallam Mele Kyari, stated this during their Stakeholders’ Visit to host communities and facilities of Oil Mining Lease (OML) 25 in Kula Kingdom of Asari-Toru Local Government of Rivers State, Saturday.

A release by NNPC Acting Group General Manager, Group Public Affairs, Mr. Samson Makoji, said the visit was in furtherance of the peace deal brokered by the GMD NNPC, under the supervision of the Minister, concerning the disputed mining lease between NNPC’s Joint Venture partner, Shell Petroleum Development Company (SPDC) and Belema Oil, held in Abuja, a fortnight ago.

In their separate addresses at the occasion, the duo assured indigenes and traditional rulers in the communities that the Federal Government was keen on attracting investments to the area and create jobs for the teeming youths.

Minister of State for Petroleum Resources, Chief Sylva, told members of the host communities that for investments to thrive in the area, there was the need for the people to live in peace and harmony with oil companies as well as cooperate with one another.

“We need unity in our land today. We have fought to this point and the Federal Government has started looking our way. It is time for us to change strategy and ensure that we bring the benefits of investments to our various communities. If we don’t make our communities peaceful, investments cannot come. The investors are ready to come here, unfortunately in some cases there is no peace,” Sylva noted.

He observed that it was the responsibility of the locals to work with the Federal Government to bring peace to the communities so that investors can come and create jobs for the youths in the area.

Speaking during the visit, the NNPC GMD, Mallam Mele Kyari, said the NNPC had the mandate of Mr. President to work with various stakeholders towards bringing lasting peace to the oil producing host communities and by extension the entire Niger Delta region.

“Our immediate priority is the restoration of peace to the host communities and not just to restore production. This is because once peace comes, oil production (which is about 35,000 barrels per day here) will ultimately return,” Kyari stated.

The GMD said following two years of dispute around OML 25 which led to the shutdown of the Belema Flow Station and loss of about 35,000 barrels of oil per day, NNPC had no option but to engage the communities towards ensuring lasting peace and restoring production.

“What we have done today is to ensure that normal life returns to this community so that after two years of dispute, we would have found a lasting solution which would enable people to go back to their work, jobs will be created and the social services that ought to come with these activities will be restored,” Kyari added.

Kyari said the next stage now was that a re-entry process would commence and that an evaluation of the extent of the damage done on the facility would be carried out and within the shortest possible time, the JV partner (SPDC) would come up with a plan for restoring production in the oil mining lease.

Speaking on behalf of traditional rulers in the Kula Kingdom, HRH, King Kroma Amabibi Eleki, expressed delight with the peace deal and their readiness to work with government towards bringing developmental projects to the people.

Also in his remarks, President General of Kula Youth, Mr. Ekine Japus, lauded the Federal Government’s peace overtures through the Minister and the NNPC, saying that it had given hope to the youth in the community.

Other highlights of the occasion included the commissioning of NNPC/Belema JV Portable Water Project as well as the groundbreaking of President Muhammadu Buhari 85km Kula-Degema-Port Harcourt Expressway.

Share about us
2019-09-29
admin
Previous: Women should Show Strength of Character to attract High Portfolio in Government- Amaechi
Next: NNPC and IPMAN Agreed to Cut Supplies to Depots Over Debts