The Nigerian National Petroleum Corporation (NNPC) has announced the termination of contracts which permitted the delivery of crude oil to Warri, Port Harcourt and Kaduna refineries.

NNPC stated that the decision to cancel the oil delivery contracts was taken after proper evaluation of the contract terms, and cancellation was due to exorbitant cost and inappropriate process of engagement.

Under the agreement, NNPC allocates a total of 210,000 barrels of crude oil per day for refining at offshore locations in exchange for petroleum products at pre-agreed yield pattern.

The Department of Petroleum Resources (DPR), Warri Zonal Office, has shut down 31 filling stations operating in Edo and Delta states for various offences.

The operations controller, DPR, Mr Olumide Adeleke, who confirmed this said that the stations were shut between August 19 and 20, for offence ranging from product diversion, to over-pricing.

According to him, 13 filling stations were sealed off for kerosene diversion while nine were shut for over pricing.
Adeleke said that the action was in line with the statutory responsibility of the organisation of ensuring that marketers complied with the federal government’s directives on sales of petroleum products. He said that this surveillance would be a continuous exercise and advised marketers to abide by the federal government’s regulated pump price of N87 per litre or be sanctioned.

“Henceforth, we will intensify our inspection and any one caught will be sanctioned accordingly,” he warned.
The controller said that plans by the organisation to introduce an electronic means of effective monitoring to tackle unwholesome practices by oil marketers were underway.

“Once the marketers know that we are in town, they adjust but once they know we are out, they go back again, so it is a big challenge to deal with. What we intend to do is to introduce other means of monitoring, using something like electronic monitoring devices. But that is still at an incubation stage,” he said.

Adeleke said that the DPR has standard and functional laboratories to test any product, adding that the inspection teams have hydrometers to test product while in the field.

Reacting to the recent kerosene explosion in a suburb in Warri, Aladja, Adeleke advised people to buy kerosene from accredited sources like the licenced peddlers, surface tanks and filling stations to avoid adulterated products.

Share about us
2015-12-14
admin
Previous: NNPC Cancels Contract With Three Refineries
Next: Nigeria: Roadmap On Solid Minerals Investment Out Next Year, Says Fayemi 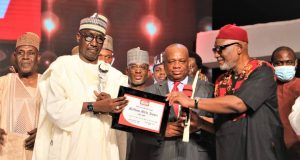